LONDON (REUTERS) - A rout in global markets moderated on Tuesday  (Aug 5) as China kept the yuan on a tight leash after its landmark drop past 7-per-dollar led the United States to label Beijing a currency manipulator.

The trade war between the world’s top economies remained near boiling point, but the heat had been reduced just enough by a firmer-than-expected official Chinese central bank yuan rate overnight to steady some nerves.

Safe-haven assets, including bonds and some currencies such as the yen and Swiss franc, settled down as investors moved tentatively back into the euro, pound and some of the emerging market currencies that have been hit in recent days.

The mood was still fragile though.

“I think the tipping point for a more prolonged negative trend (for risk assets) is quite close,” said SEB Investment Management’s head of asset allocation Hans Peterson, referring to the trade war escalation and other risks such as Brexit.

“We have reduced both European and global equities. We still have a small overweight in EM (emerging market) stocks but just a small one.”

US stock index futures were positive in the early hours of Tuesday morning, after Wall Street saw its worst trading day of 2019 in the previous session, CNBC reported. Around 5:40am ET, Dow futures turned indicated a positive open of more than 125 points. Futures on the S&P and Nasdaq were also higher.

European shares steadied after posting their biggest two-day drop in over 3 years, as upbeat German data soothed some of the nerves around the past week's escalation of US-China trade tensions.

German industrial orders rose 2.5 per cent in June, the biggest jump since August 2017, although the government of Europe's biggest economy said it was yet to reach a turning point after months of weakness which have worried investors. 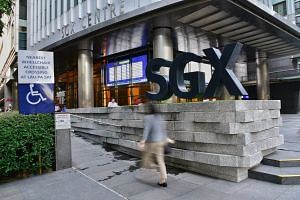 London's FTSE 100 index, packed with miners and commodity-focused firms who are heavily exposed to Chinese demand, fell another half a percent in morning trade. The pan-European STOXX 600, however, gained 0.06 per cent.

Earlier in Asia, MSCI’s broadest index of Asia-Pacific shares outside Japan ended down 0.75 per cent after brushing its lowest since January. It has lost 3.7 per cent so far this week.

In Singapore, shares continued to take a beating on Tuesday but pared back early losses after China moved to stabilise the yuan. The Straits Times Index dropped as much as 1.6 per cent, a nearly two-month low, but regained ground steadily over the session to close at 3,170.47, lower by 24.04 points or 0.75 per cent.

China’s offshore yuan stretched the previous day’s slide, and briefly weakened to 7.1382, the lowest since international trading in the Chinese currency began in 2010. But it pulled back to 7.0469 after Beijing’s firmer-than-expected yuan fixing on Tuesday. The Japanese yen, a perceived safe-haven in times of market turmoil and political tensions, touched a seven-month high of 105.520 per dollar before dropping back to 106.700 in volatile trade.

The Swiss franc, another currency sought in times of turmoil, has gained roughly 1 per cent against the dollar this week. It set a six-week peak of 0.9700 franc per dollar.

Trump and US Treasury Secretary Steven Mnuchin had said on Monday that China was manipulating its currency, and that Washington would engage the International Monetary Fund to eliminate unfair competition from Beijing.

“The markets are now scrambling to factor in the possibility of the United States imposing not only an additional 10 per cent of tariffs on Chinese imports, but the figure being raised to 25 per cent.

Goldman Sachs also said it no longer expects the United States and China to seal a deal before the November 2020 US presidential election as policymakers from the world’s largest economies are “taking a harder line”.

Though US Treasury yields had edged up from October 2016 lows of 1.672 per cent, German yields stayed down with markets now pricing in a 100 per cent chance that the European Central Bank will cut its already deeply negative interest rates at its next meeting.

Brent crude oil futures plumbed a seven-month low of US$59.07 per barrel as the trade war raised concerns about lower demand for commodities. Brent last traded at US$60.41 for a gain of 1 per cent as bargain hunting kicked in.

Spot gold advanced to a six-year peak of US$1,474.80 an ounce as investors sought the safety of the precious metal.