SINGAPORE - Credit rating agencies in Singapore are not expected to have their business affected by the European Commission's decision to strip five countries of some market access rights, said Singapore authorities on Monday (July 29).

In a statement on Monday, the EU commission confirmed it has deemed that Argentina, Australia, Brazil, Canada and Singapore no longer regulate credit rating agencies as rigorously as the EU does.

It is therefore removing a status that made it possible for European banks to rely on those ratings directly, and this is the first time such access rights - called equivalence provisions - have been withdrawn, although some temporary permissions for Switzerland were allowed to lapse earlier this year.

"Under this regime, ratings issued by credit rating agencies in Singapore are endorsed by their related entities in the EU, and can continue to be recognised and used for regulatory purposes in the EU," MAS added

The four agencies here are: Standard and Poors; Fitch Ratings; Moody's and AM Best Asia Pacific.

Equivalence means the EU commission recognises that the financial regulatory or supervisory regime of certain non-EU countries is equivalent to the corresponding EU framework.

The aim, said the Financial Times an an earlier report, is to ensure that trading platforms, brokers and other companies based in non-EU financial centres can serve European clients as long as they are undergo strong regulation and supervision. The provisions are used by more than 30 countries. 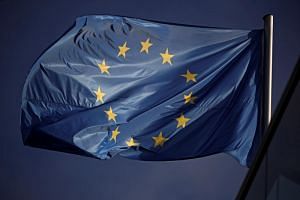 The MAS, however, noted that even as Singapore's regime for rating agencies no longer has equivalence status, the Republic continues to be on the list of countries that the European Securities and Markets Authority (ESMA) has deemed as meeting the legal and supervisory framework for the endorsement regime.

A spokesman for credit rating agency Moody's said the EU Commission's decision will not have an impact on its general operations.

"Where applicable, credit ratings will continue to be endorsed by our EU-registered credit ratings agencies and can be used for regulatory purposes in the EU," he added.

Moody's agencies are registered in a number of European countries including Italy, Germany, France, Spain and Britain, according to the ESMA website.

Analysts said that the EU's decision to strip Singapore, among other countries, of some market access rights may have only limited impact, if any, on the Republic.

CIMB Private Banking economist Song Seng Wun said: "There should not be any... impact on Singapore businesses in the EU because of the news."

"It's a case of, say, an European Union client cannot rely on Fitch Singapore for a rating (but the client) can get a rating from (an EU-registered Fitch agency) instead."

He said that the EU move is a timely reminder for businesses to follow all EU rules. "There's a new EU Parliament, so expect more new rules."

"It's about amending or adhering to the rules, then showing the EU bureaucrats that we are compliant."

Associate Professor Lawrence Loh of the National University of Singapore said the credit ratings system signifies the ability of a borrower to fulfil debt obligations like interests and principal repayments.

"The EU's move seeks to manage market access rights of countries... In essence, non-EU countries must be deemed to have the same level of rigour in regulation as the EU counterparts so as to enjoy the same privileges."

He added that countries outside the EU which have market access rights will lose them if local regulatory practices are deemed non-equivalent.

"For Singapore, it will be necessary to review the specific areas that are deemed non-equivalent... It will be in the details that have to be addressed," added Prof Loh, who is director at the Centre for Governance, Institutions and Organisations.

Prof Loh also noted that the EU is moving towards ensuring equivalence with the countries that the bloc trades with because of Brexit.

Singapore and the other four countries the EU has named as not having met its standards might be a result of collateral damage.

"The current EU's attention to regulatory equivalence may well be a warning shot aimed at the United Kingdom amid the ongoing Brexit saga."