SHANGHAI (REUTERS) - Asian stocks wobbled on Friday (July 6), as Washington slapped tariffs on Chinese imports, a move many investors fear could be the start of a full-scale trade war between the world's two largest economies.

The US tariffs on more than 800 goods from China worth US$34 billion took effect at 0401 GMT (12:01pm Singapore time). US President Donald Trump has warned the United States may ultimately target over US$500 billion worth of Chinese goods, an amount that roughly matches its total imports from China last year.

China's commerce ministry said shortly after the US tariffs took effect that it was forced to retaliate, meaning US$34 billion worth of imported US goods including autos and agricultural products are also subject to 25 per cent tariffs.

MSCI's broadest index of Asia-Pacific shares outside Japan was 0.1 per cent lower, pulling back from a modest early rise. The index has lost near 9 per cent since June 7.

The Shanghai Composite index ended morning trade down 0.3 per cent, before the tariffs took effect, and trading will resume at 0500 GMT. Earlier on Friday, the index fell as much as 1.6 per cent to 2,691, getting close to its January 2016 low of 2,638.

Shares of Singapore, a major trading hub for the region, dropped more than 2.0 per cent to 14-month lows, after the government unexpectedly tightened curbs on the property market.

Japan's Nikkei stock index rose 1.1 per cent from Thursday's three-month low, helped in part by a boost in automaker shares on signs Washington and the European Union may be seeking a compromise on tariffs on cars.

Seoul's Kospi index, down in the morning, was flat.

A trade war "now has become a reality," he said."If this was a boxing match, the first round has just begun. It is going to be a long process. Trump is unlikely to back down easily ahead of the US mid-term elections (in November), especially given the recent rise in his popularity," Fujito said.

"How that's going to iron out, I think that's still going to be a major point of contention. But at least they're talking and I think while cooler heads prevail, that's the positivity that's emanated from the markets," said Stephen Innes, head of trading APAC at OANDA.

Japanese carmaker shares rose 1.4 per cent, with Toyota Motor up 1.6 per cent and Honda Motor up 1.5 per cent. South Korea's Hyundai Motor jumped 2.9 per cent.

In Europe, automakers' shares jumped 3.4 per cent on Thursday.

Still, many market players remained cautious given the risk of further escalation in the trade war between China and the United States.

Copper, seen as barometer of the world's economic strength because of its wide industrial use, extended its losses to US$6,236 per tonne, down 1.7 per cent on the day. It has fallen 15 per cent from its peak hit just a month ago.

In the currency market, the yuan eased slightly in a choppy trade, though it kept some distance from its 11-momth lows touched earlier this week. 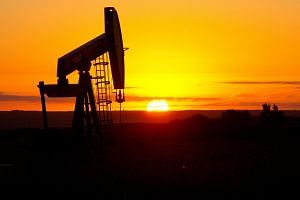 US-China trade war: US energy, agricultural and plastics firms gird for next round of tariffs 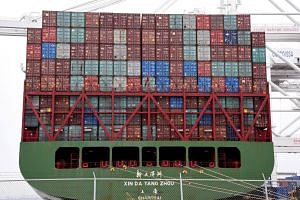 Newly released minutes from the US Federal Reserve's last policy meeting on June 12-13 showed policymakers discussed whether recession lurked around the corner, and expressed concerns global trade tensions could hit an economy that by most measures looked strong.

The two-year yield, which rises with traders'expectations of higher Fed fund rates, was at 2.553 per cent compared with a US close of 2.561 per cent.

The US dollar was little changed against the yen at 110.67 .

The single currency was down a hair on the day at US$1.1685, while the dollar index, which tracks the greenback against a basket of six major rivals, was flat at 94.474.

However, the market remains nervous on concerns over tariffs amid an increasingly tight oil market.

Tensions between the US and Iran continued to rise as the US Navy said it stood ready to ensure free navigation and the flow of commerce, after Iran's Revolutionary Guards threatened to block oil shipments through the Strait of Hormuz.