SINGAPORE - Singapore investigators have launched a probe into No Signboard Holdings' recent share buyback and obtained statements from the restaurant group's key executives, the company announced on Monday (April 29) before the market opened.

No Signboard said that it is "fully cooperating" with the Singapore Police Force's Commercial Affairs Department (CAD) after receiving requests on April 24 to assist investigations into a Jan 31, 2019, purchase by the company of its own shares. Those shares were bought at a price that was above the regulatory limit on share buybacks and purchased during a black-out period.

From April 24 to April 26, the company provided CAD with access to and copies of documents in connection with the abortive share buyback, the company said.

Chief executive Sam Lim Yong Sim and chief financial officer Voon Sze Yin have also given statements to the CAD to provide information in connection with the matter. Mr Lim's passport has been retained by the CAD, which the company described as a requirement during investigations. No person in the company has been arrested or charged for any offence by the authority, and business and operations "have not been affected and will continue as usual", the company said.

The investigations will also not affect Mr Lim and Ms Voon in their respective roles and functions as key executive management of the company.

No Signboard's shares will resume trading on Monday after having been halted since April 24. The stock last changed hands at 8.4 cents before the halt.

According to earlier announcements by No Signboard, Mr Lim had on Jan 31, instructed the company's broker, UOB Kay Hian, to submit bids on the market to buy the company's own shares of up to 14 Singapore cents each under a newly obtained share buyback mandate. The bid price was more than 5 per cent above the five-day average closing price of the stock, and therefore exceeded the regulatory limit on share buyback prices. 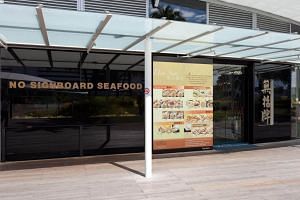 As UOB Kay Hian bought the shares at the higher-than-allowed prices, No Signboard's stock surged by almost 24 per cent to 15 Singapore cents on Jan 31, prompting a query from the Singapore Exchange and a trading halt from the company.

The share buyback also breached a black-out period because the company's audit committee and board had yet to approve its results for the three months ended Dec 31, 2018.

The company has described Mr Lim's instructions to the broker as an "honest mistake".

About a week after the erroneous buyback trades, No Signboard also revealed that the board had not sanctioned the buyback trades on Jan 31. As a result, UOB Kay Hian and the company agreed to "mitigate" the error by taking the position into the broker's error-in-trade account, and any costs in relation to the purchased shares will not be borne by the company.