SINGAPORE - British home appliance manufacturer Dyson will transfer its head office's registration to Singapore, a decision that comes just months after it announced that it will set up its first electric car plant here.

This means Dyson - famed for its bagless vacuum cleaners and bladeless fans - will become a Singapore-based business and primarily be regulated by the law here.

"What we've seen in the last few years is an acceleration of the opportunities to grow a company from a revenue perspective in Asia," Dyson chief executive Jim Rowan said in a press conference on Tuesday (Jan 22).

"All of our manufacturing and a majority of our future investments will be in Asia," he added, noting that countries in the region such as China have grown at a rapid pace to the size of mature markets like the United States and Japan.

Tech adoption in places like India and South-east Asia is expected to accelerate in the coming years as well, he added.

This is among reasons why Dyson's chief financial officer and chief legal officer will be relocated to Singapore "very shortly" and its team built up here.

Mr Rowan said the decision did not have anything to do with Brexit or tax benefits, adding that it is for the company to be in the best position to "secure opportunities" and keep an eye on its investments. Mr Rowan is based in Singapore as well. 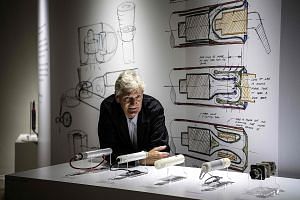 Why Dyson picked Singapore to build its electric cars

He added that Brexit is unlikely to impact Dyson given that its supply chain is based in South-east Asia. He also said Singapore's corporate tax rate of 17 per cent - lower than Britain's - would mean only a "negligible" difference in what would be paid.

Mr Rowan stressed that the move to relocate to Singapore was an "evolutionary decision" due to the changing landscape.

Dyson's "centre of gravity" has been shifting towards Asia, which in 2017 generated almost 75 per cent of its revenue growth.

The firm already employs 1,100 people here and plans to double the size of its research and operations (R&D). Its Singapore Technology Centre at Science Park One will double in size as well.

Its global R&D team grew to 5,853 engineers and scientists in 2018, with investments deepening in areas including energy storage and robotics.

This came as investments in advanced manufacturing and research reached a new high, while revenue growth continued, in part on the back of new products such as its new hairdryer and air purification technology.

The firm also announced that former Infiniti Motor Company president Roland Krueger will join Dyson in April, in the lead-up to the expected completion of its electric-car manufacturing facility here by next year. The first model could be rolled out by 2021.

Mr Krueger will be based in Singapore as well, and will oversee all aspects of Dyson's automotive project as it approaches launch.

The company has about 430 people working on the car, and expects this to grow as well. Its Singapore manufacturing facility is part of Dyson's £2 billion move into automobiles.

Singapore expertise in advanced manufacturing was among the factors that made it an "ideal location" to manufacture the Dyson car, said the company, adding: "An increasing majority of Dyson's customers... are now in Asia. This shift has been occurring for some time and will quicken as Dyson brings its electric vehicle to market."

The company ceased British production of domestic appliances in 2003. It has facilities in Malaysia and the Philippines as well.

Dyson continued its £31 million investment in higher education in Britain, where its core creative and engineering parts will remain.

Asked about the relocation, the Economic Development Board of Singapore's assistant managing director Kiren Kumar said: "Over the past decade, Singapore's manufacturing sector has been steadily transforming into one that competes based on the deep skills of our workforce, the use of advanced technologies such as robotics and automation, and a strong ecosystem of suppliers locally and in the region."

"We believe that Singapore's advantages are a good fit with Dyson's requirements and have made Singapore a natural choice for their relocation," he added.