SINGAPORE - BreadTalk founder George Quek is coming full circle with the food and beverage company’s latest move – a proposed complete acquisition of Food Junction, a food court operator he had helped start in 1993.

Analysts said BreadTalk Group’s plan to buy Food Junction Management for $80 million marks a further consolidation in the food courts and coffeeshops market as larger firms continue to take out smaller ones in seeking market share and expansion.

The proposed acquisition will be paid in cash funded through BreadTalk’s internal resources, including available cash on hand, and debt facilities, the company said in an announcement on the Singapore Exchange on Monday (Sept 2).

BreadTalk’s wholly-owned subsidiary, Topwin Investment Holding, entered into a sale and purchase agreement for the move on Aug 30.

The acquisition is set to make BreadTalk the third-largest food court operator here, behind NTUC Enterprise – which announced it would buy  food centre operator Kopitiam last year – and Koufu.

As at June 30, BreadTalk operates 14 food courts in Singapore and two in Malaysia under the Food Republic and Food Opera brands.

But Mr Yeo noted that while the transaction value is $80 million, this is for a business whose net profit in the first half of 2019 was just $3,183.

With Food Junction’s net tangible assets valued at $12.3 million, this implies a price-to-book ratio of over six times, he said.

The ratio compares a company’s market value to its net assets and in comparison, Koufu has a price-to-book ratio of less than four times.

Mr Yeo also pointed out that there could be some drag on earnings per share in the short-term, with interest cost from the loan for the acquisition weighing on BreadTalk. But he noted that Food Junction seems to be turning around with headline earnings in the first six months this year improving.

“Food courts are a high fixed-cost business. Once revenue exceeds that fixed costs, there is going to be a high margin potential,” he said.

But there are benefits to strengthening market share and the store network, he said. A larger network provides scale to compete better in the market. 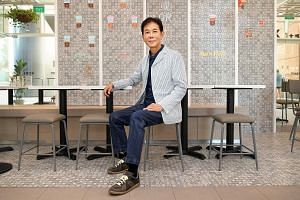 Lunch With Sumiko: BreadTalk's George Quek on conquering the world, one loaf at a time

BreadTalk buys out joint venture partner in Thailand for $6.96m

Food Junction: Decor distinctive but not the stalls

BreadTalk said yesterday that the planned acquisition will allow it to obtain additional revenue streams and “benefit from the synergies” with its existing businesses. This can be done through a streamlining of costs and sharing of resources.

CIMB Private Banking economist Song Seng Wun believes that beyond economies of scale, the move is also driven by growing wealth in Asia and a plan to tap larger markets outside Singapore.

Food Junction provides another food option that BreadTalk can take with it abroad, he said.

BreadTalk already has close to 1,000 outlets across 16 countries, under brands like Toast Box, and franchise partners such as Din Tai Fung and Song Fa Bak Kut Teh. It plans to open its first Song Fa outlet in Taiwan in the second half of the year.

Associate Professor Lawrence Loh of the National University of Singapore Business School said he expects the food court segment to continue to be a highly relevant one.

“Going forward, if the economy is not doing well, disposable income will go down and people will move down the ladder in consumer habits. This includes food, with people going to restaurants less,” he said. “I expect this will happen soon, if uncertainty in the economy creeps into the consumer space.”

The seller, Food Junction Holdings, is 98.10 per cent owned by Auric Pacific Group, a Singapore-incorporated investment holding company involved in businesses ranging from food manufacturing and retailing to restaurants.

About 50 per cent of Auric Pacific Group is held by Lippo China Resources through its subsidiaries. The remaining 49.7 per cent is held by the chairman and executive director of Lippo, Dr Stephen Riady, and his son-in-law, Dr Andy Adhiwana through companies they own.

Auric Pacific Group said it “undertakes strategic reviews of its businesses from time to time with a view to maximising returns to its shareholders, and considers the proposed acquisition allows it to unlock value and realise its investment”.