Their combined net worth on the Bloomberg Billionaires Index rose 0.8 per cent from Friday to US$4.4 trillion at the close of trading in New York.

Global stocks and commodities rallied as investors wagered the FBI's latest determination that Mrs Clinton's handling of e-mails wasn't a crime has boosted her chances of becoming the 45th president.

US billionaires prefer a Clinton presidency, as measured by their donations to the two candidates, with 17 of the country's richest people contributing to the Democratic nominee, according to data compiled by Bloomberg.

"The market's perception is that a Clinton presidency will be similar to the last eight years in terms of regulatory action and the amount of change in the economy will be less than under a Trump presidency," said Mr Robert Lutts, chief investment officer of Cabot Wealth Management Inc in Salem, Massachusetts. 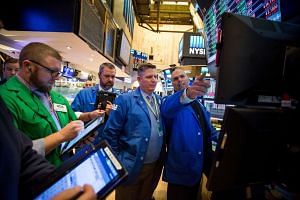 US billionaires account for one-third of the Bloomberg wealth ranking and had the biggest gains among the group, adding US$22 billion. Amazon.com founder Jeff Bezos, ranked No. 3 in the world with US$68.2 billion, led the surge with a US$2.6 billion rise. Mr Warren Buffett, the world's fourth-richest person with US$66 billion, added US$1.5 billion.

Gains were broad-based across sectors and industries, with 118 billionaires seeing gains of US$100 million or more.

Mexico's richest person, Telecom magnate Carlos Slim, added US$2.5 billion as the Mexican peso rallied with expectation of a defeat for Mr Trump. The New York real estate magnate used the word "rapists" when discussing immigrants from Mexico and has vowed to renegotiate relations with the country's third-largest US trading partner.

Bill Gates is the world's richest person with a net worth of US$86.3 billion. He added US$1.5 billion on Monday.