SYDNEY/TOKYO (REUTERS) - Asian shares outside Japan and currencies struggled on Thursday (Dec 15) after the Federal Reserve raised US interest rates for the first time in a year and hinted at the risk of a faster pace of tightening than investors were positioned for.

Yields on short-term US debt surged to the highest since 2009, sending the US dollar to peaks not seen in almost 14 years.

Wall Street suffered its biggest percentage decline since before the Nov 8 US presidential election, though the loss was slight compared with gains of the last month or so.

The Fed's rate rise of 25 basis points to 0.5-0.75 per cent was well flagged but investors were spooked when the "dot plots"of members' projections showed a median of three hikes next year, up from two previously. 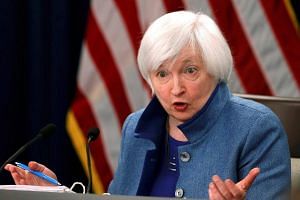 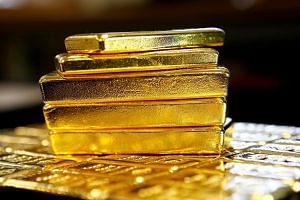 Some analysts note that the change came even as the Fed's economic projections have hardly been upgraded, suggesting the Fed could accelerate tightening even further if policymakers see firmer evidence of higher growth or inflation.

"The US economy is already on a solid expansion but the new administration wants to do large-scale spending. That could surely boost inflation and US bond yields," said Norihiro Fujito, senior investment strategist at Mitsubishi UFJ Morgan Stanley Securities.

Investors had bet heavily on a more dovish message and many positions were quickly unwound.

"The fact that the market, including me, was leaning the wrong away exacerbated the move," said Steven Englander, Citi's global head of forex based in New York.

Fed fund futures slid to imply an almost 50 per cent chance that the Fed will raise rates three times, with two hikes fully priced in already.

Yields on two-year Treasury paper jumped 10 basis points to 1.27 percent, the biggest daily increase since early 2015 and the highest level since August 2009.

It also took the premium that US Treasuries pay over German two-year debt to its fattest since 2000.

That jump could suck more funds out of emerging markets and will be taken badly by stocks and currencies across Asia.

The drop in the yen could cushion Japanese stocks, lifting Japan's Nikkei 0.9 per cent.

Other Asian markets had less luck, with MSCI's broadest index of Asia-Pacific shares outside Japan dropping 0.7 per cent.

Some attention would be on the Chinese yuan with the risk that a sharply lower opening fix could add to pressure for a competitive depreciation from other Asian currencies.

Stocks have been on a tear in recent weeks on speculation the incoming Trump Administration will pursue tax cuts and increase infrastructure spending.