Shares fell more than 7 per cent in extended trading.

Third-quarter earnings were US$4.23 a share, compared with US$5.75 in the period a year earlier, the Seattle-based company said Thursday in a statement.

Analysts, on average, estimated US$4.59 a share, according to data compiled by Bloomberg.

Amazon projected operating income of US$1.2 billion to US$2.9 billion in the current quarter compared with analysts' estimate of US$4.31 billion (S$5.8 billion).

Investors have been keeping a close watch on Amazon's spending plans as the company tries to meet a pledge to expand one-day delivery for members of its Prime programme, and invests in more capacity for the Amazon Web Services cloud-computing group.

The ramped up spending this year curbed investor enthusiasm for Amazon, whose shares had neared records as recently as July on growing profits driven by AWS, services for third-party sellers and advertising.

Amazon also is facing increasing regulatory scrutiny, as the Department of Justice and Federal Trade Commission examine the practices of the largest US technology companies.

Amazon has so far avoided fines of the sort levied by the FTC on Facebook and by the European Commission on Alphabet's Google, but investors are weighing the risks should the spotlight stay on the company. 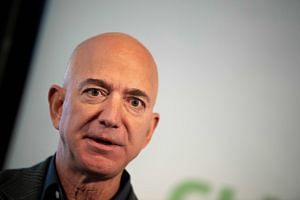 Revenue gained 24 per cent to US$70 billion in the period ended Sept 30. Analysts projected US$68.7 billion.

Net income narrowed to US$2.13 billion, from US$2.88 billion a year earlier, the first year-over-year decline since the second quarter of 2017.