HONG KONG (BLOOMBERG) - Stewardship of Asia's most valuable company is passing to a financial wizard who has led the company's effort to drag the traditional retail industry into the 21st century.

Jack Ma will step down as executive chairman of Alibaba Group Holding Ltd in 2019, handing the reins to Daniel Zhang, who became chief executive officer barely three years ago. The 46-year-old certified accountant has been the driving force behind a mandate to transform old-school commerce using technology that it's dubbed "New Retail."

Since his ascension, the Shanghai-educated executive has proven a capable operator, designing and pulling off mega-events such as the annual Singles' Day shopping bonanza. The company's stock has risen 87 per cent over his tenure and Alibaba now has a market value of about US$420 billion, eclipsing WeChat operator Tencent Holdings Ltd.

Zhang's known as more of a financial mind than a technology visionary in Ma's mold. The veteran CFO espouses a less flamboyant style than his charismatic boss, who dispenses folksy wisdom on the global conference circuit and hob-nobs with heads of states and celebrities. His appointment holds some irony: Ma often said he wasn't fond of professional managers because of a focus on short-term performance.

Ma hired Zhang from Chinese gaming giant Shanda Interactive Entertainment Ltd in 2007 -- an episode Ma handled with kid gloves because Shanda's founder was a longtime friend and prominent entrepreneur. Ma went to Chen Tianqiao's home for dinner and apologized in person for the recruitment.

"At the time, Alibaba was a smaller private company so it shows that Daniel is also a visionary," Chen said in an interview on Monday (Sept 10).

Ma made the announcement on his 54th birthday, capping a storied two-decade career during which the former English school-teacher built Alibaba into one of China's most celebrated corporations, running eBay out of the country and relegating Amazon.com to the unfamiliar position of also-ran. Along the way, he hived off a payments service in controversial fashion, creating the US$150 billion online finance giant Ant Financial. 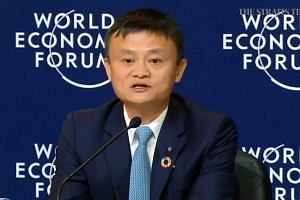 As Jack Ma prepares to move on, here's a look at Alibaba's journey

Zhang now has to steer China's largest corporation abroad, where it's made headway in markets like South-east Asia but remains alien to many Western consumers. He'll enjoy unprecedented authority to do so, combining the chairman and CEO roles for the first time since Ma himself held the positions prior to 2013.

"Jack Ma's said CFOs don't make good CEOs, but Daniel is an exception," said Kim Eng Securities analyst Mitchell Kim. "The challenges will be how Alibaba can expand outside of Asia."

Zhang's signature endeavour has been his drive to transform old-school shopping using data analysis to manage inventory and shipping. That's an effort that's driven more than US$8 billion of deals in the span of several years, involving traditional retail chains such as Suning.

That effort caps a meteoric rise. Zhang joined Alibaba in 2007 as chief financial officer of Taobao, when the consumer-to-consumer marketplace was fresh off a victory over Meg Whitman and eBay but also battling a reputation for fakes. He proved his worth by turning Taobao Mall into Tmall, which sold higher-quality goods direct from branded merchants. That service later became instrumental in helping repair Alibaba's image, and the US removed the company from its "Notorious Markets" list in 2012 (though it re-joined in 2016).

Earlier this month, Zhang penned an editorial for CNBC in which he laid out his leadership approach. They included management tropes such as thinking long-term, but there were more novel axioms such as "buy, don't bet," in which Zhang explained that acquiring beats investing when it comes to strategic projects.

"If you're going to win a race, it's more important to buy a horse than just bet on it," he wrote.

His elevation now ranks him a cut above a team of lieutenants who've stood by Ma for a decade or more. Among them are Ma's close confidante, Joseph Tsai, who's also 54 and remains vice chairman, and Lucy Peng, once a front-runner for leadership who led Ant Financial before taking the helm at South-east Asian operation Lazada.

Zhang's also been credited as one of the key architects of Alibaba's Singles' Day extravaganza, now an annual US$25 billion shopping spree that covers more than 200 countries. Prior to Alibaba, Zhang worked at PriceWaterhouseCoopers and Arthur Andersen after getting a bachelor's degree in finance from the Shanghai University of Finance and Economics.

Despite his rapid ascent, the executive remembers his roots, Chen said. "Many years after he left Shanda, he still finds time to attend Shanda's annual alumni gathering and gives a speech," the founder said. "That's touching."