A rare female founder in male-dominated Silicon Valley, Holmes wove a compelling personal story: a 19-year-old wunderkind whose fear of needles drove her to invent a rapid blood-analyzing technology that required just a few drops from a finger prick.

Over the years, Holmes, now 34, persuaded some of the most powerful men in Washington to serve on her company's board - drafting former secretaries of state George Shultz and Henry Kissinger and Marine General Jim Mattis as advisers. Their reputations lent credibility, connections and heft to a young company that promised to upend medicine by making blood tests cheap, fast and accessible.

That story unraveled on Wednesday (March 14) as the Securities and Exchange Commission alleged a breathtaking scale of deception in the story Holmes and former company president Ramesh "Sunny" Balwani told to investors.

The SEC accused Holmes, Theranos and Balwani of an "elaborate, years-long fraud" that included misleading product demonstrations, false reassurances about regulators, incorrect claims that the technology had been deployed on the battlefield in Afghanistan and gross exaggerations about the company's financial status.

Holmes and Theranos have not admitted or denied the allegations, but they have resolved the case. As part of Holmes' settlement, she agreed to a US$500,000 fine and a 10-year ban on serving as an officer or director of a public company. She will relinquish her majority voting control of the company and give up significant equity.

"I think it's a pretty unique set of remedies," said Steven Peikin, the co-director of the SEC's enforcement division. "I think it's a particularly meaningful one . . . in Silicon Valley, where the founders of start-up companies like this obviously value the concept of control."

Peikin would not say whether Holmes or Balwani could face criminal charges. Balwani did not agree on a settlement and will face the SEC in court.

Theranos has been in free fall since 2015, when a Wall Street Journal investigation revealed problems at the company. Regulators uncovered deficiencies and banned Holmes from owning or operating a laboratory for two years.

In detailed complaints, the SEC alleges that investors sank more than US$700 million into Theranos, swayed by exaggerations and misrepresentations of the proprietary blood-testing technology at the core of the business.

Holmes founded Theranos in 2003, focused on developing its finger-stick blood analyzer. Six years later, its funding was running out; Balwani provided a line of credit for the company and became its president.

Holmes and Balwani turned to developing another version of the analyzer, the miniLab, that would be capable of a broad variety of blood tests. Although the technology wasn't ready, they decided to try to partner with a large pharmacy chain and a large grocery chain to take their technology to consumers.

The commercial partners are not named by the SEC, but Theranos opened wellness centers in Walgreens drugstores in Arizona and California. The Wall Street Journal previously reported that Safeway spent US$350 million to build wellness clinics in its stores. Both agreements have since been terminated.

When the blood tests were due to be launched in the first drugstores in September 2013, the technology was not ready, according to the complaint. Instead, Holmes and Balwani allegedly asked company engineers to modify technology already commercially available to analyze samples - but did not disclose that to their commercial partners. 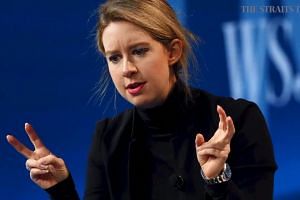 US biotech start-up star, who once worked in Singapore on testing for Sars, charged with US$700m fraud

The complaint describes technology demonstrations that were an elaborate ruse. In a room full of Theranos's proprietary analyzers, for example, the company would collect finger-stick samples from pharmacy executives, leaving the impression that samples could be analyzed by Theranos technology. Holmes did not tell the executives that the firm was using analyzers made by other companies for some of the tests, the complaint says.

When the general counsel of the grocery chain raised questions about Theranos' technology, Holmes and Balwani said it could perform 90 per cent of the most commonly used blood tests. But the company used its proprietary technology to perform only about a dozen tests, according to the SEC.

Holmes began to do media interviews in 2013 and 2014, appearing on magazine covers and drawing comparisons to innovators such as Apple co-founder Steve Jobs.

She cultivated the image of an idealist set on transforming medicine, who met resistance from skeptics whose doubts were just a ploy to preserve business models that could be turned upside down by her disruptive technology.

In her meetings with investors, Holmes would explain her fear of needles and her vision for fast, cheap blood testing before inviting people to try Theranos technology for themselves.

Potential investors would receive a finger-stick blood test and then see the sample inserted into Theranos' device or taken away to be analyzed, leading them to believe that samples were being analyzed using the technology the company had invented.

Theranos projected in materials given to investors that the company would generate more than US$100 million in revenue in 2014; in fact, the company recorded about US$100,000 in revenue, according to the SEC.

The SEC also alleges that Holmes claimed to investors that Theranos technology was being used by the Defense Department on the battlefield in Afghanistan and on medevac helicopters. Those statements were "important to potential investors because these relationships lent legitimacy to Theranos' business and its proprietary analyzer," the SEC alleges.

That technology was never deployed on the battlefield by the Defense Department, even though Mattis, who then led the US Central Command, personally pushed for it. Regulatory officials in the military had flagged problems with Theranos's approach. Mattis later joined Theranos's board; he resigned after being nominated as defense secretary.

The company ran into a snarl of regulatory problems, but Holmes allegedly told investors that the company did not need approval from the Food and Drug Administration. In late 2013 and 2014, the FDA communicated to Theranos and Holmes that the company needed FDA approval or clearance of its tests.

"The Theranos story is an important lesson for Silicon Valley," Jina Choi, director of the SEC's San Francisco regional office, said in a statement. "Innovators who seek to revolutionize and disrupt an industry must tell investors the truth about what their technology can do today, not just what they hope it might do someday."