KUALA LUMPUR/SINGAPORE (BLOOMBERG) - One of the worst global financial scandals is taking its toll on the world's longest bull market run.

Deepening concerns over 1Malaysia Development Bhd (1MDB), the embattled state investment fund at the centre of probes from Switzerland to Singapore, has spurred the biggest outflow of foreign funds in eight months. Malaysia's benchmark stock index has erased most of its gains after climbing to this year's high in April.

The prolonged impact of 1MDB is prompting investors to seek out other markets in South-east Asia, according to Baring Asset Management.

"People are probably getting impatient as they continue to hear noises about 1MDB," Mr Lim Soo Hai, a Hong Kong-based money manager at Baring Asset, which oversees about US$41 billion (S$56.5 billion), said by phone. "We're hesitant to invest in Malaysia as we're not seeing a lot of interesting stocks that we can find."

The exodus of international funds is a dramatic reversal from the first quarter of the year when money managers piled in at the fastest pace in South-east Asia, propelling the stock index to an eight-month high. The FTSE Bursa Malaysia KLCI Index almost doubled from its 2008 lows without succumbing to a 20 per cent drop, making it the longest bull-market worldwide. 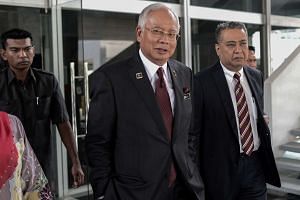 After gaining 7.9 per cent from this year's low in January, the stock index has retreated almost 6 per cent from the April peak. That's pushed Malaysia's stock index far behind in the rally by its emerging peers in South-east Asia even as lower valuations have created some bargains.

"We're still not invested in Malaysia," said Mr Raymond Kong, Singapore-based fund manager at One Asia Investment Partners, which oversees US$2.5 billion of assets. "The other Asean markets have better growth prospects and better fundamentals. The 1MDB issue is definitely keeping issues at bay, away from Malaysia."

For the year, the FTSE Bursa Malaysia KLCI Index has fallen 3.7 per cent, compared with a 4.3 per cent gain in the MSCI South East Asia Index. Thailand's SET Index has rallied 11 per cent in 2016, Indonesia 5.3 per cent, Philippines 7.4 per cent and Vietnam 6 per cent. The Malaysian gauge is down 14 per cent from its record in 2014.

The scandal surrounding 1MDB deepened last week after Singapore shut down BSI's unit in the city-state as the Swiss authorities began criminal proceedings against the Swiss bank related to money flows from the embattled Malaysian investment fund.

The probes and move against BSI's Singapore unit are part of global investigations surrounding 1MDB into alleged money laundering and embezzlement. A Malaysian parliamentary committee identified at least US$4.2 billion of irregular transactions by the state fund, and recommended the advisory board headed by Prime Minister Najib Razak be disbanded. Both 1MDB and Datuk Seri Najib have consistently denied wrongdoing.

Not all money managers are bearish, especially with the measure priced near the cheapest level relative to global equities since the 2008 global financial crisis.

"This is a healthy correction and might be the best opportunity out there to position for the next leg up," said Mr Tan Ming Han, Kuala Lumpur-based senior investment manager of Amundi Malaysia, whose KAF Vision Fund beat 95 per cent of peers with a return of 14 per cent over three years.

"The current correction is similar to a seasonal downpour resulting from economic, political and global macro noises."

"In this tough market, we want to look at companies whose balance sheets are strong and their underlying operations are still generating cash flow," Mr Chen said. "The only way to outperform the market is through stock-picking. In the long term, good fundamentals would prevail. The problem with short term is that sometimes markets would not behave correctly."

The drop in Malaysian stocks was also aggravated by a cut in company share weightings by MSCI. Some of the largest shares from CIMB Group Holdings, Malayan Banking to Petronas Chemicals Group saw MSCI reducing their weightings in its indexes, prompting investors to rebalance their portfolios in line with the changes.

Foreign investors sold a net RM3.9 billion (S$1.31 billion) of Malaysian shares in the five weeks from the end of April, reducing inflows so far this year to RM2.48 billion, according to MIDF Amanah Investment Bank, citing stock exchange data. That compares with outflows of RM19.5 billion last year and RM6.9 billion in 2014.

The equity outflows also come as Malaysia's economy is forecast to expand at the slowest pace in seven years in 2016, hit by a two-year slump in energy prices.

"Malaysia has been affected by the weak oil prices. We are in a very lackluster growth environment," said Baring Asset's Lim. "These noises we hear on the political front haven't been very helpful in terms of investor confidence."