SINGAPORE - A new artificial intelligence-based camera system is being developed in Singapore.

The system could be applied to surveillance cameras, or mounted on AI robots and autonomous vehicles, said Dr Feng Jiashi, an assistant professor at the National University of Singapore's (NUS) Department of Electrical and Computer Engineering.

It will be developed jointly by a team of researchers from NUS, led by Dr Feng, and Beijing-based AI firm Pensees Technology. Both sides signed a research collaboration agreement on Wednesday (July 31).

Pensees was set up in 2017, and is known for its integrated industrial application solutions in computer vision and Internet of Things technologies.

On Wednesday (July 31), Pensees unveiled the Pensees Singapore Institute, its new research and development facility, the company's first outside of China.

At the launch, Pensees also signed a memorandum of understanding with Nanyang Polytechnic, which will see both collaborate on the development of autonomous system technologies, autonomous robots, as well as AI application development and testing. 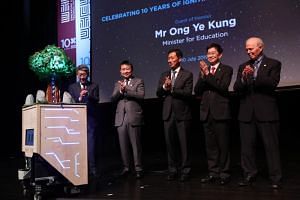 An A.I. for the eye: New tech cuts time for spotting signs of diabetic eye disease

How to train AI to be fair to humans

Adapt to AI as it takes hold at the workplace

The research collaboration between the Chinese firm and NUS has been selected as one of the AI 100 Experiments (100E) project managed by AI Singapore (AISG) and will receive funding for 18 months, Dr Feng said.

AISG is a programme under the National Research Foundation to grow the AI talent pool in Singapore and 100E is its flagship programme.

Pensees founder and chief executive Ma Yuan, 33, has described Singapore as a hotbed for AI innovation, which is benefiting from a coordinated effort by businesses, government agencies and citizens alike.

"Singapore plays an important role in the next wave of AI innovation, and we are thrilled at the idea of establishing our footing here as we seek opportunities to enhance our offerings and work with AI talent from both academia and industry," he said.

Speaking to The Straits Times, he said he believed that the Pensees facility in Singapore would provide the firm with greater exposure in the region.

He also said that he had been looking for talent and opportunities in Malaysia and Thailand as well.

The company counts Chinese electronics contract manufacturer Foxconn as one of its investors, after the Apple supplier jointly financed Pensees' 150 million yuan (S$30 million) funding round in April this year, alongside leading Chinese security supplier Qihoo 360 and other industrial investors.

Pensees managing director and chief scientist Jane Shen, who will be heading the facility here, said that the Singapore Government has been very supportive of both local and foreign tech firms, building a conducive ecosystem for AI firms.

Ms Shen, 55, who was previously with Panasonic, joined Pensees in March this year when the company set up its research facility in Singapore.

While Pensees' products have mostly been used for security applications, such as in place of keycard and fingerprint access systems in office buildings in China, its technologies can also be applied to other purposes, Mr Ma said.

Its face recognition technologies can also be used to find missing people using the images captured through closed-circuit television cameras, he added.