SINGAPORE - Hyflux has about 50,000 shareholders, bondholders, perpetual securities holders and preference shareholders - and over 60 per cent of them are owed around $1.17 billion in total.

Of that amount, $265 million is debt owed to medium-term note (MTN) holders, and $900 million to perp and preference shareholders, Hyflux chief executive Olivia Lum said on Thursday (July 19). The water treatment specialist's total liabilities stood at $2.95 billion as of March 31.

"We still have to do our utmost to ensure that the company stays viable and work towards a viable scheme so everyone will be treated fairly," Ms Lum said in her first media appearance since Hyflux filed for court protection to reorganise its debts in May.

The main question raised by many of some 200 MTN holders at a townhall on Thursday was whether they will be able to get their money back, and what triggered Hyflux's voluntary filing, group executive vice-president and group chief financial offer Lim Suat Wah said.

They also wanted an update on the sale of Hyflux's largest asset, Tuaspring integrated water and power plant, proceeds of which will be used to pay back its 29 lenders and other creditors, among other things.

"We don't have a restructuring plan to share yet, but the townhall is to keep them informed and help them understand what will happen going forward," Ms Lim said.

Hyflux management has yet to receive any firm offer for Tuaspring, said Ms Lum. But there are now eight interested parties - comprising a "good mix" of both foreign and Singapore companies. Some are waiting for approval by water agency PUB before they can start looking at the plant. Some have received it and gained access to Hyflux's dataroom, she added.

Binding bids will have to be made by Oct 1. Hyflux's main lender Maybank has given it until Oct 15 to ink a binding purchase agreement. 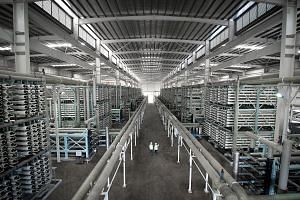 Hyflux has till Oct 15 to find Tuaspring buyer

Perp talk: What you need to know about perpetual securities

"We all know that under these conditions when the power market is weak, it is very difficult to get good value. But it also cannot be so unreasonably low that I can't even pay my stakeholders," Ms Lum said.

Meanwhile, Hyflux has signed non-disclosure agreements with 19 interested parties for possible rescue financing. None are its current bank lenders, although it is in discussions with a few banks on rescue financing, Mr Glenn Peters of Ernst & Young Solutions' transaction advisory services said.

"Beyond that, we are also in discussions with project finance banks for support to complete projects," he added.

Despite its woes, Ms Lum said the company has not laid off any of its 2,500 employees. "There were some resignations... but we still need people to execute our projects," she said.

She added that most of her clients remain supportive. In the last few weeks, Hyflux secured two projects "despite their knowing we are in a restructuring exercise".

"So I feel that our business is still very viable... We are still wanted despite what we are going through."