The slump in a sector that made up nearly a third of Singapore's manufacturing output last year is reinforcing expectations that the export-driven economy could slide into recession in the coming months.

Making microchips for everything from cell phones to cars has long been central to the success of Singapore, the tiny trading island seen as a bellwether for the global economy.

"We are already seeing that this downturn is different,"said Ang Wee Seng, executive director for the Singapore Semiconductor Industry Association (SSIA).

Ang said he was "preparing for the worst" and putting his staff on standby to help any laid off workers try and find new jobs.

The semiconductor industry is a broad term for firms making electronic components including memory chips and microprocessors. Many of the world's biggest chipmakers have operations in Singapore.

John Nelson, CEO of UTAC, a Singapore headquartered firm which tests and assembles chips, told Reuters he had started a"consolidation process" in Singapore which may result in a 10-20 per cent headcount reduction in the city-state by year end. 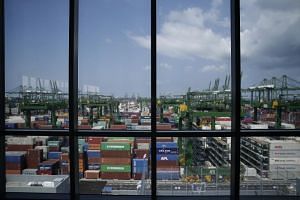 Preparing for a downturn: How manufacturing sector is holding up

UTAC, backed by private equity firm TPG, has 10,280 employees worldwide of which around 1,700 are based in Singapore.

"We are taking the appropriate actions to make sure there is a future for our business in Singapore," said Nelson, adding they may also add more days where the factory is closed and workers take unpaid leave.

Nelson said while the global industry was suffering, problems were magnified in Singapore due to high overhead costs like rent, wages and utilities.

Lim Kok Kiang of Singapore's Economic Development Board, a government agency which promotes the city-state as a business hub, said while the semiconductor industry faced challenges, Singapore remained competitive in the sector and has been attracting investment.

"The weaker global economic environment has affected demand in export-oriented sectors internationally, and the semiconductor sector is no exception," he said.

Global semiconductor sales are expected to decline 12-13 per cent in 2019, according to industry association SEMI, on course for their biggest drop since the dotcom bubble burst in 2001.

While the industry is used to swings in demand for the latest tech products, this slump is exacerbated by trade tensions between the US and China.

The two superpowers have imposed tit-for-tat trade tariffs on a number of products, while the US has also banned firms from dealing with Huawei, the world's biggest telecoms equipment maker, due to security concerns.

Firms in Singapore have been directly affected by these measures and caught in crossfire, said SSIA's Ang, declining to give names.

Apple supplier AMS is another firm that has cut jobs in Singapore this year.

"We did reduce staffing in Singapore to adapt to more muted demand trends in the consumer market in the first half and to reflect improvements in manufacturing efficiency," Patricia Moosburger, a company spokesman, said in response to e-mailed questions from Reuters.

Moosburger declined to comment on specifics but Singapore media reported as many as 600 people had been cut.

The semiconductor industry made up 28 per cent of Singapore's total manufacturing output in 2018, and 76 per cent of its electronics production, official data shows.

Allen Ang of Aldon Technologies Services Group, a supplier of parts and services to semiconductor firms, said because Singapore exports most of its output, it is more vulnerable than other chipmaking hubs like Taiwan and South Korea which have more domestic electronics demand.

Ang estimates factories in Singapore are on average operating 10-15 per cent below their utilisation rate last year.

Singapore exports plunge 17.3% in June for biggest drop in 6 years

Singapore's exports dropped to a six-year low in June, data released last week showed, mainly due to a 31.9 per cent contraction in electronics exports - the sector's biggest drop in a decade.

It was the latest in a slew of weak data that has reinforced some economists' expectations the central bank will ease monetary policy in the coming quarters.

Singapore's economy is seen as a gauge of global growth because international trade dwarfs its domestic economy.

The latest export data suggests Singapore is losing its electronics market share to other Asian countries, said ING economist Prakash Sakpal, citing its under performance relative to Korea and Taiwan, as well as Malaysia, Philippines, Thailand.

But UTAC's Nelson said despite the cutbacks, his firm was also making millions of dollars of investments in Singapore on equipment for new customers and projects, including for 5G networks, the next generation of mobile communications.

"I wouldn't paint a picture that it's all bad," Nelson said.

"There is light at the end of the tunnel."