SINGAPORE (BLOOMBERG) - Singapore private home prices may rise as much as 10 per cent by the end of next year and are on track to double by 2030 as faster income growth overpowers recent property curbs and higher interest rates, according to Morgan Stanley.

Home prices rose in four of the five previous rate-hike cycles, Morgan Stanley analysts said in a note to clients. Faster economic growth, the city-state's attraction as a global hub and demand from buyers flush with cash from collective sale redevelopments will underpin the housing market, they said.

The bullish outlook came after the latest property curbs prompted the analysts to revisit last year's forecast that home prices would double by the end of the next decade.

"Contrary to common perception, we believe housing supply/demand dynamics remain favourable, and we anticipate a wave of capital inflows into the housing market," Mr Wilson Ng and his colleagues said. "Housing supply is still below historical averages and set to fall."

The Government has emphasised that the goal of the property curbs is price stability and sustainable growth in line with economic fundamentals.

Morgan Stanley expects policy interventions to apply equally to both up- and down-cycles, so if prices decline, the Government could relax some of the property curbs, the analysts said.

The Government rolled out eight rounds of policy tightening for the housing market as home prices surged 60 per cent between 2009 and 2013. 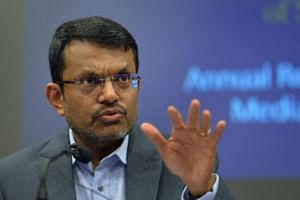 It partially removed seller stamp duties in 2017, before re-embarking on curbs in 2018. Because most of the measures from the previous tightening cycle remain in place, this leaves a much wider toolkit to stimulate the housing market, should the need arise, Morgan Stanley said.

Singapore will also stay relevant as a global hub, which will help attract capital inflows into the property market, analysts at the New York investment bank said.

A wave of mega-flagship projects, such as a new terminal at Changi Airport, highlight government efforts to enhance Singapore's competitive edge as a vibrant global city in attracting foreign capital and talent.