SINGAPORE - Local gaming company Razer's electronic payments wallet has hit Singapore's shores - albeit in a limited testing phase - half a year after it made its debut on the other side of the Causeway.

The Razer Pay e-wallet was launched on Friday (March 1) for beta testing by gamers and other users, ahead of a full rollout that has now been scheduled for within the first six months of 2019.

Razer chief executive Tan Min-Liang had previously said that Razer Pay, which was introduced in Malaysia in July 2018, would be available on home soil by April 2019.

Hong Kong-listed Razer also named mobile payment company FOMO Pay its official merchant acquirer on Friday. FOMO Pay, which provides merchants with the technology to accept payment from multiple e-wallets with a single QR code, will accept Razer Pay on its network of 4,000 payment points in Singapore, while helping to add more merchants to the platform.

The agreement with FOMO Pay follows an earlier tie-up in November 2018, to enable Razer Pay on unified point-of-sale terminals run by Nets, which is owned by Singapore's three local banks.

Mr Tan said in a statement: "Razer Pay is already one of the largest e-wallets in Malaysia and we plan to provide for inter-operability across the border to Singapore in the future.

"Over the next few weeks to months, we expect tens of thousands of new merchants to begin enabling Razer Pay as part of our partnerships with Nets and FOMO Pay in Singapore." 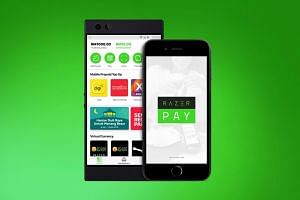 Razer Pay to launch in Singapore by first quarter of 2019

Zack Yang, chief operating officer of FOMO Pay, added: "Many of our merchants have seen accelerated growth upon the adoption of mobile payments. This partnership with Razer Pay is exciting for us as we believe it will enable them to extend their reach even further to the youth and millennial audience."

Mr Tan's e-wallet ambitions made headlines after he said in August 2017, in the wake of Prime Minister Lee Hsien Loong's National Day Rally, that he could have a unified e-payment system "nationwide in 18 months".

He later set his sights regionally, inking a strategic partnership with telco group Singtel - which has its own plans for a VIA e-payments network across Asia - in May 2018. Razer also bought out Malaysian e-payments platform MOL Global for US$61 million in cash around that time.

During beta testing, Razer Pay users can make purchases at Dunkin' Donuts outlets, and at the Buzz convenience stores owned by Singapore Press Holdings, which publishes The Straits Times.

Razer, which has been based in San Francisco, broke ground on Feb 22 for its new regional headquarters in Singapore's high-tech one-north district, near Buona Vista.

The building, set for completion by mid-2020, will house 19,300 square metres of offices, research and development laboratories and design studios across seven storeys.