SINGAPORE - The granting of up to five new digital bank licences in Singapore will increase competition within the sector, but is unlikely to threaten the dominance of DBS Bank, OCBC Bank and UOB, Fitch Ratings said on Tuesday (Sept 3).

This is because the city-state's largest banks have strong franchises and growing digital capabilities, and the regulator is also committed to prevent "value-destructive" competition, which will prevent the three incumbents' business volumes or profitability from being eroded significantly, Fitch noted.

DBS, OCBC and UOB are all rated "AA-" with a stable outlook by Fitch, and are also assigned viability ratings of "aa-".

The Monetary Authority of Singapore (MAS) is now accepting applications for new digital bank licences until the end of this year.

MAS will announce in mid-2020 up to two digital full bank licences that allow access to retail deposits, and up to three digital wholesale bank licences catering to SMEs (small and medium enterprises) and other non-retail segments.

Ride-hailing firm Grab and Vertex-backed peer-to-peer lender Validus Capital have openly indicated their interest in applying for the licence. Besides local names, European digital bank start-ups such as Revolut are expected to be taking a closer look, as well as Ping An Insurance's fintech arm OneConnect.

The regulator's objective is to liberalise the banking industry, although it has made clear that digital banks must not engage in "value-destructive" behaviour to gain market share.

The digital banks' activities will be subject to regulatory restrictions - for instance, an aggregate deposit cap of $50 million and individual depositor cap of $75,000 - until they are well established. This is meant to mitigate the risks of untested business models on Singapore's long-term financial stability.

Digital full banks will have to meet the same capital and liquidity requirements as existing local banks as well as the same consumer lending rules, such as limits on unsecured credit extended and loan-to-value ratios for mortgages.

"We expect the new entrants to increase competition in lending, particularly to more digital-savvy retail and SME customers, despite the regulatory restrictions," Fitch said on Tuesday.

Such greater competition in the lending market will benefit customers, but it could increase risk for banks if they relax their underwriting standards or under-price risk in an attempt to capture or defend market share, the ratings agency said.

"However, we believe DBS, OCBC and UOB will remain disciplined, and they are also well-placed to compete digitally, having invested significantly in their digital capabilities in recent years - a trend we expect to continue as the market evolves," it added.

The digital banks will also increase pricing competition for deposits as they become more established and seek to develop their funding bases.

But Fitch does not expect the increased deposit competition to pose a material threat to the leading incumbents, as it will take time for the newcomers to build trust with customers and capture a meaningful amount of core deposits.

The Business Times (BT) reported last week that new entrants are toying with ideas of a consortia with other non-banking players and traditional lenders. 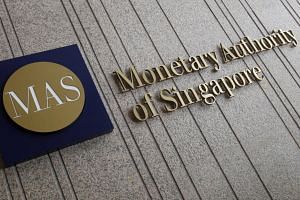 With Singtel already signalling interest publicly, its peer M1 - which is part of the Keppel conglomerate - has also left the door open to the option. Other names bandied about include property firms and utilities providers that are unusual parties to digital banking partnerships, BT understands.

"These tie-ups could eventually enhance the incumbent banks' franchises, through cross-selling and by leveraging each partner's digital platforms and capabilities," Fitch noted.

The agency sees minimal downside risk to incumbents' profitability as these partnerships will likely lead to more measured competition - albeit with some additional costs in the form of potential duplication, capital investment and management attention.

New dynamism in the banking system could help more customers to access credit, including higher-risk SME borrowers which often face greater hurdles in borrowing from banks.

Digital banks, potentially linked to technology firms and with access to a wide range of customer data, may also be better able to serve a broader range of customers by assessing their credit profiles using non-traditional data, Fitch said.

"We believe the underserved market will be fairly small domestically as Singapore is well-banked, but it could prove a fertile test-bed for new entrants before they launch operations in more lucrative markets in the region," it added.

Separately, a study last month found that nearly two-thirds of bank users in Singapore are keen to open digital bank accounts this year, compared with 52 per cent last year. Some 70 per cent of younger customers said they are willing to use digital banks, according to the poll by consultancy firm JD Power.