SINGAPORE (THE BUSINESS TIMES) - DBS and UOB have joined OCBC to close temporarily some of their branches till May 4 during the month-long imposition of tighter restrictions to reduce the community spread of Covid-19.

While banks are essential services that will stay open during this "circuit breaker" period, lenders are shutting a significant number of branches in anticipation of fewer customer visits and to look out for staff welfare.

The authorities in Singapore have assured that all financial markets in Singapore remain open, and that payment services are unaffected.

The remaining branches that remain open must be well distributed across the country to adequately meet their banking customers' needs. ATM services must also remain available.

That leaves 28 DBS/POSB branches that will stay open with regular banking hours.

For branches that remain open, the first hour of opening will be dedicated to the vulnerable group of customers from April 9, said the lender. This group comprises the elderly (aged 60 and above), pregnant mothers and customers with disabilities.

"In line with the stricter government guidelines to keep Singaporeans safe, we have sought to strike a balance between meeting customers' needs and doing our part to safeguard the well-being of both branch staff and the public," a DBS spokesman told BT.

UOB announced on Tuesday it will close 24 branches from April 11. For these, UOB said it will ensure the nearest open branch is within a three kilometre radius.

The 38 branches that will remain open will keep to existing operating hours are mostly located near other essential services such as grocery stores and food and beverage outlets. Customers can visit UOB’s website to locate the branch closest to them and for details on opening hours.

Like DBS, UOB has also dedicated the first operating hour at its branches to serving elderly and vulnerable customers.

Both banks also urged customers to use their comprehensive suite of digital services for their banking needs within the safety and comfort of their homes.

OCBC  last Friday said it will close 22 of its branches from April 9 to May 4. With that, 24 branches remain open, including all 19 branches that offer banking services on Sunday. 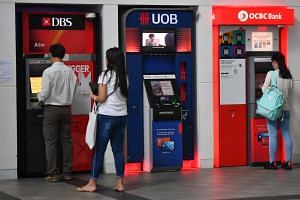 Coronavirus: Financial services will remain available, but some bank branches to close

Maybank, HSBC, Citi and Standard Chartered have also announced plans to temporarily shut selected branches in Singapore from April 9 to May 4.

Maybank said on Tuesday that it will temporarily close eight branches. Six, which will be shut from April 9, are located at Holland Village, Jurong East, Tampines, Waterway Point, Yishun, and Orchard Shopping Centre (MSpace). Two other branches at Textile Centre and Woodlands 888 will be closed from April 15.

Over the same period, Citibank Singapore will close four branches at Asia Square, Woodlands, Holland Village and Punggol. This is in addition to the four Instant Banking Centres - located at Bugis, Boon Lay, Tampines and Changi Business Park - which have been temporarily closed since March 27.

Remaining Citi branch locations will have revised operating hours, and vulnerable customers  will be provided with a dedicated hour from 9.30am to 10.30am as well as priority queues to enter these branches for their banking needs, said the bank.