SINGAPORE (THE BUSINESS TIMES, BLOOMBERG) - DBS Group reported a 14 per cent boost in net profit to $1.51 billion for the fourth quarter from a year ago, on the back of broad-based business momentum, and said it saw limited impact on its business from the coronavirus if the outbreak is contained "by summer".

In line with lenders in Hong Kong and Singapore that are helping clients from the virus-hit fallout, DBS is offering a six-month debt moratorium on principal repayments for property loans extended to small and medium-sized enterprises (SMEs) in Singapore and Hong Kong, as well as on mortgage loans for home owners in Singapore, it said.

United Overseas Bank on Wednesday announced it has allocated $3 billion of “relief assistance” for its affected Singapore corporate clients, particularly SMEs, to have more flexibility in their cash-flow management.

DBS is one of the first major Asian banks to flag the risks to earnings from the virus, which has claimed more than 1,100 lives and spread across the region. A day earlier,  the bank said one employee working at its main Marina Bay Financial Centre office had been infected with the coronavirus (Covid-19), resulting in all DBS employees on the affected floor vacating the premises.

DBS CEO Piyush Gupta on Thursday said the bank was on track to meet its previous 2020 guidance prior to the outbreak of the coronavirus.

Assuming the virus is controlled by the summer, DBS is expecting a revenue impact of around 1 to 2 per cent, and special provisions could rise by a few basis points of loans, said Mr Gupta.

On its latest results review, he said: "Our record performance with return on equity at a new high of 13.2 per cent demonstrates a franchise that delivers high quality results. The increased quarterly dividend proposed by the board reflects the enhanced capacity of our business to generate earnings and reward shareholders."

DBS' net profit for Q4 was just above the average estimate of $1.48 billion from five analysts, according to data from Refinitiv. Earnings per share stood at $2.31 for the quarter, up from $2.01 previously.

Directors recommended a final dividend of 33 cents per share, subject to shareholders' approval at the annual general meeting on March 31. This will bring the full-year payout to $1.32 per share - an increase of 10 per cent. The dividends will be paid on April 21.

DBS is the first Singapore bank to announce its FY2019 results. Next to do so will be OCBC and United Overseas Bank on Feb 21. 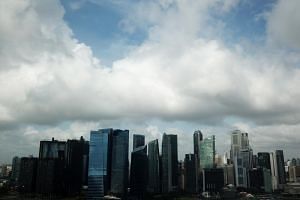 3 risks for banks in the time of coronavirus

For the quarter, DBS' total income increased 7 per cent on the year to $3.46 billion from loan growth and a double-digit improvement in fee income.

NIMs are a key gauge of profitability for banks, measuring the difference between income earned from loans and the interest paid to depositors.

Net fee income grew 17 per cent from a year ago to $741 million, led by wealth management and investment banking fees.

Other non-interest income rose 5 per cent year on year to $294 million due to higher gains on investment securities.

The non-performing loan (NPL) ratio was stable at 1.5 per cent. Specific allowances were $199 million, or 21 bps of loans, which DBS said was in line with recent quarterly trends.

On a full-year basis, DBS recorded a 14 per cent jump in net profit to $6.39 billion, while total income rose 10 per cent to reach a new high of $14.5 billion, again from broad-based business momentum.

Full-year net interest income increased 7 per cent to $9.63 billion. NIM was 4 bps higher at 1.89 per cent as an increasing margin in the first half was moderated by the impact of declining interest rates in the second half.