First quarter profit rose 8.5 per cent on a year earlier, while DBS, the first Singapore bank to kick off the sector's results, said the macro-economic environment had stabilised.

"We were positively surprised by strength in trading gains," Jefferies analyst Krishna Guha said in a report. "Overall, core driver was in line with expectations, we expect similar trends for peers as well," he added.

Net profit came in at $1.65 billion for the three months to end-March, up from $1.52 billion a year earlier and an average estimate of $1.48 billion from four analysts, according to Refinitiv I/B/E/S.

DBS shares advanced 2.8 per cent on Monday morning to the highest since June 2018, outperforming a 0.8 per cent rise in the broader market .

"We have had a good start to the year as business momentum was sustained and non-interest income recovered from the recent weakness," CEO Piyush Gupta said in a statement.

After three years of strong loans growth, Singapore's banks are gearing up for tougher times as the city-state's export-reliant economy slows, partly due to a trade war between China and the United States, analysts say. 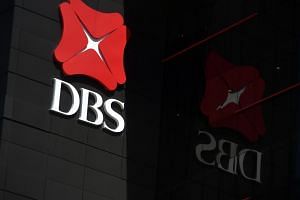 DBS said its loans grew 1 per cent in the latest quarter from the fourth quarter. Non-trade corporate loans rose 3 percent while trade loans declined 4 per cent.

"The record earnings and return on equity (ROE) progression demonstrate the strengthened profitability of our franchise from digitalisation, a shift towards higher-returns businesses and more nimble execution," Gupta said.

The bank's return on equity rose to 14 per cent, its highest in more than a decade. Net interest margin rose five basis points to 1.88 percent, in line with higher interest rates in Singapore and Hong Kong.

DBS also declared a 30 Singapore cents per share dividend, consistent with the fiscal 2018's full-year payout of $1.20 per share.

The bank said its board has decided to pay dividends on a quarterly basis instead of semi-annual dividends from fiscal 2019 onwards to provide shareholders with a more regular income stream.

The first-quarter dividend will be paid on May 31.