SYDNEY (REUTERS) - The Australian government is due to release on Monday (Feb 4) the final recommendations of the independent inquiry that exposed systemic wrongdoing in Australia's financial sector last year, likely leading to sweeping changes to the country's banking industry.

The big banks, insurers, pension funds and regulators who oversee the financial industry are bracing for a brutal summary of their misdeeds and weaknesses, and a list of tough recommendations including possible criminal charges.

The Royal Commission was a quasi-judicial independent body led by a former high court judge that was tasked by the government, reluctantly at first, with investigating financial sector misconduct following a string of banking scandals.

For 11 months, its public hearings shocked the country and wiped more than A$60 billion (S$58.7 billion) from top financial stocks as investors factored in the prospect of tougher regulation, higher compliance costs and thinner margins.

Regulators were also grilled by the commission's barristers about why they seemed reluctant to crack down on wrongdoing, sometimes penalising firms with little more than a mildly worded press release.

"There will be nothing positive in the recommendations because the banks have clearly breached various obligations in the laws, and obligations to good customer service," said Mr Matthew Wilson, a banking analyst at Deutsche Bank.

Among other things, analysts expect the inquiry will recommend tougher enforcement of responsible lending laws, an end to certain conflicted commissions paid to financial advisers, and limits to executive bonuses.

In a separate but related ruling on Monday which underscored the tougher new regulatory environment, Australia's corporate watchdog ordered an arm of Commonwealth Bank of Australia to stop taking financial-advice fees due to concerns about its charging practices.

The Royal Commission's report, due for release around 0520 GMT (1.20pm Singapore time), comes ahead of an election expected in May which opinion polls suggest the centre-left Labor party will win. Labor says it expects to adopt all the commission's recommendations.

Conservative Prime Minister Scott Morrison, who initially dismissed Labor calls for a banking inquiry as a "populist whinge", has said he also expects to take up most of the recommendations.

But he has warned against overreaching and cutting off credit flows, a likely battle-line for the government as it fights for electoral survival.

Even before the release of its final report, the inquiry has already pushed top executives out of their jobs and prompted billions of dollars of customer remediation payments. 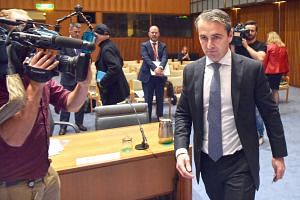 The hardest-hit company has been financial planner AMP, which saw its chief executive officer, chairwoman, chief lawyer and three directors leave following evidence that its board allegedly doctored an independent report to a regulator.

AMP shares fell 4 per cent to a record low on Monday and have more than halved since the inquiry began in February 2017, the biggest decline among the large institutions. The 170-year-old company, which has denied wrongdoing, issued a profit warning on Jan 25.

Shares in the major banks edged lower in early trade on Monday before reversing to post gains of about 1 per cent by lunchtime, helping the broader market 0.3 per cent higher.

"There is growing speculation among traders that... we could actually see more certainty in the sector, despite likely bad news, and that certainty will be enough to bring a bounce this week," said Mr Michael McCarthy, chief market strategist at stockbroker CMC Markets.