The move is part of efforts to encourage innovation in inter-bank payments, said the group led by the Monetary Authority of Singapore (MAS) and The Association of Banks in Singapore (ABS).

The consortium of banks and technology companies led by the MAS and the ABS is exploring the use of distributed ledger technology (DLT), commonly known as blockchain technology, to increase speed and privacy in cross-border payments.

The multi-phase initiative, which started last November, has been dubbed Project Ubin.

The first phase, which looked at establishing a proof-of-concept design to conduct inter-bank payments using blockchain technology, was completed earlier this year. The second phase, which finished in October, saw the development of prototypes on three different blockchain platforms: Corda, Hyperledger Fabric and Quorum.

The second phase of the project was conducted together with 11 financial institutions and five technology companies.

Central banks, financial institutions, as well as academic and research institutions will be able to tap the publicly-released source codes to facilitate their experiments, research and innovation, the MAS and the ABS said in a statement on Tuesday (Nov 14).

The MAS said that it will tap the collective knowledge of the open-source community and hopes to "encourage both institutions and individuals to contribute and improve on the prototypes". 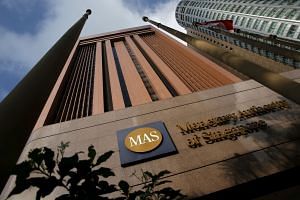 "We aim to link up such DLT-based systems in the future for improved cross-border connectivity. This is our contribution to the global financial ecosystem, and a step towards developing cheaper, safer and more efficient cross-border payments."

ABS director Ong-Ang Ai Boon said: "Project Ubin has brought the banks together in experimenting with DLT in a collaborative, and multidisciplinary manner. We see immense benefits from such industry partnership that creates a vibrant ecosystem.

"We are also encouraged that the fruits of our project can be shared with other central banks and players in the financial industry to catalyse more innovations."