SINGAPORE - Food and beverage distributor Lim Siang Huat has been doing business in Singapore for 79 years, and currently plans to consolidate operations under a single warehouse, rather than to operate out of three facilities as it does now.

The company will be getting help to reach this goal through the Scale-up SG programme, which aims to help high-growth local companies scale rapidly.

"I am concerned that as a firm which has been around for so long, we may be too comfortable to challenge ourselves, and this programme is a good opportunity for us to stretch ourselves," said executive director Jack Lim, who is the third generation of leaders of the company, which he runs with his two siblings.

Lim Siang Huat is one of 18 local companies that have been selected for the second run of the programme, said Enterprise Singapore (ESG) on Thursday (Dec 5). The companies operate in a wide range of industries - manufacturing and engineering, trade and connectivity, as well as lifestyle and consumer sectors.

The Scale-up SG programme launched in July this year with 25 companies, of which almost half have established plans that are expected to help them double their growth rate.

The firms worked with consultancy companies McKinsey & Company and PwC Singapore to complete the analysis of their growth plans over the last five months and will execute their individual growth plans with support from ESG and the consultancy firms under the next phase of the programme.

On Thursday, 20 firms participating in the 2½-year Scale-up programme took part in a closed-door dialogue with Trade and Industry Minister Chan Chun Sing.

Speaking to media after the dialogue, Mr Chan said that the ministry, along with ESG and other government stakeholders, are changing their approach of growing companies from providing subsidies and grants to building capabilities, as it is more sustainable.

"One of the interesting issues they discussed during the session was how to grow or scale a company beyond a family business, how you keep the energy levels up that transcend your family members, and build to last," Mr Chan said. 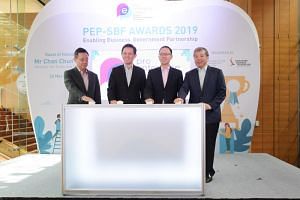 How to prevent the situation where a company is stuck after they "reach a certain size" and "need to be bought out by bigger partner" is also an issue that companies have to consider, he added.

The next step for the ministry and ESG is to look at similar programmes for small and micro enterprises, Mr Chan said, adding that the ministry is considering a version of the Scale-up programme for small businesses which is "slightly less intensive" and could target more than 20 to 25 companies per batch.

"One by one, we hope to transform our enterprise capabilities, so that they add up to be greater than the sum of the individual parts."

Mr Loke Wai San, executive chairman of equipment manufacturer AEM Holdings, which worked with McKinsey over the last few months as one of the first 25 companies on board Scale-up SG, said that the programme provides a structure for companies to frame issues and decide on the best strategies to take forward.

While AEM Holdings is not new to scaling, having taken its revenue from $15 million eight years ago to around $300 million today, Mr Loke said it was good to have a sounding board and additional views to validate their findings.

"The programme is supplementing some of the knowledge (which firms have) with frameworks, but you get what you put into it, and ultimately it's up to the leadership teams in these companies to (execute)," he said.