In its editorial, the Inquirer says that given the country's description as "prone to natural calamities" a department focusing on preventing tragedies from happening should have been established by now.

MANILA (PHILIPPINE DAILY INQUIRER/ASIA NEWS NETWORK) - The Philippines is truly living up to its reputation as one of the countries most prone to natural disasters, with typhoons, earthquakes and volcanic eruptions on the regular menu of unwelcome visitors.

Worse, the economic losses are mounting, and each disaster seems to be worse than the one before it.

A preliminary assessment of the impact to the economy of the ongoing restlessness of Taal Volcano was estimated by Socioeconomic Planning Secretary Ernesto Pernia at P7.63 billion (S$201 million) in Batangas alone.

The sector most affected has been agriculture, with the Department of Agriculture estimating that damage from Taal's steam-induced eruption has climbed to P3.06 billion.

The disaster spared no crop, destroying nearly 16,000 hectares of land around it planted to coffee, cacao, pineapple, rice and coconut.

The fisheries sector saw the highest value of damage after the eruption at P1.6 billion for the tilapia and milkfish farms around Taal Lake.

Worse, Taal's fury is threatening the existence of the tawilis, the lone freshwater sardine in the world found only in Taal Lake.

There are other industries affected by Taal's destructive activity.

Tourism has virtually grounded to a halt in Tagaytay, where the view of Taal Lake has been a major draw. The operations of many companies located in the economic zones in the Cavite-Laguna-Batangas-Rizal-Quezon area (or Calabarzon, the region nearest Taal Volcano) were also disrupted.

Response, as is usual in past disasters, has mostly been palliative.

The government calls for an evacuation of residents in the danger zones, the private sector mobilises its resources to provide basic amenities to these people in evacuation centres, and clueless congressmen seek to probe how and why the natural disaster happened in the guise of formulating legislation to avoid it in the future.

When the dust finally settles, a rehabilitation program is discussed, with fingers crossed for its speedy approval and efficient, corruption-free implementation. 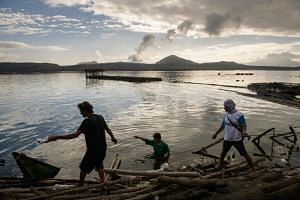 No way of telling if alert level 5 could be raised in Philippine capital: Inquirer columnist

Albay Representative Joey Salceda last week proposed the formulation of a rehabilitation plan for Taal's vicinity that may need funding of up to P100 billion.

Senator Panfilo Lacson, who headed the rehab effort after the catastrophic Super-typhoon "Yolanda" devastated the Visayas in 2013, observed that when calamity strikes, resources and assistance tend to pour in at the beginning, but wane after a year or so.

The government's record in this area is indeed dismal.

The rehabilitation plan for areas destroyed by Yolanda has yet to be fully implemented; Marawi City, ruined by a months-long battle between government forces and Islamic State-allied militants, has yet to be rebuilt, and many areas in Mindanao shattered by earthquakes are still recovering.

This brings up in importance the creation of an agency - a dedicated government office or even a department - to handle disaster management, mitigation and planning. Experts have noted that the National Disaster Risk Reduction and Management Council (NDRRMC) is not as effective as it should be, because it is a council chaired and composed of Cabinet secretaries not focused on disaster and rehabilitation.

Given the country's unflattering description as "prone to natural calamities" and now also in the front line of wrenching climate change, a department focusing not only on disaster response, but more so on preventing tragedies from happening, should have been established by now.

Evacuation and rehabilitation need not be as costly and haphazard if permanent danger zones (where no people should be residing in the first place) are enforced, for instance, and structures are required to conform to stringent standards to withstand calamities like earthquakes and typhoons.

More than all the temporary relief, the government needs an agency to draw up long-term plans to ensure that the future restlessness of Taal - and all other disasters this country is heir to - will not cause as much economic and social damage as they do today.

A bill creating the Department of Disaster Resilience (DDR) has been pending in Congress, and it needs to be passed immediately.

In his State of the Nation Address last year, President Duterte called on Congress to speed up the creation of the DDR, noting that "natural disasters are poverty creators."

Over the last three years, Congress has progressively slashed the country's calamity fund; it can rectify that error by prioritising the creation of a department solely focused on long-term disaster mitigation and relief.

The Philippine Daily Inquirer is a member of The Straits Times media partner Asia News Network, an alliance of 24 news media organisations.