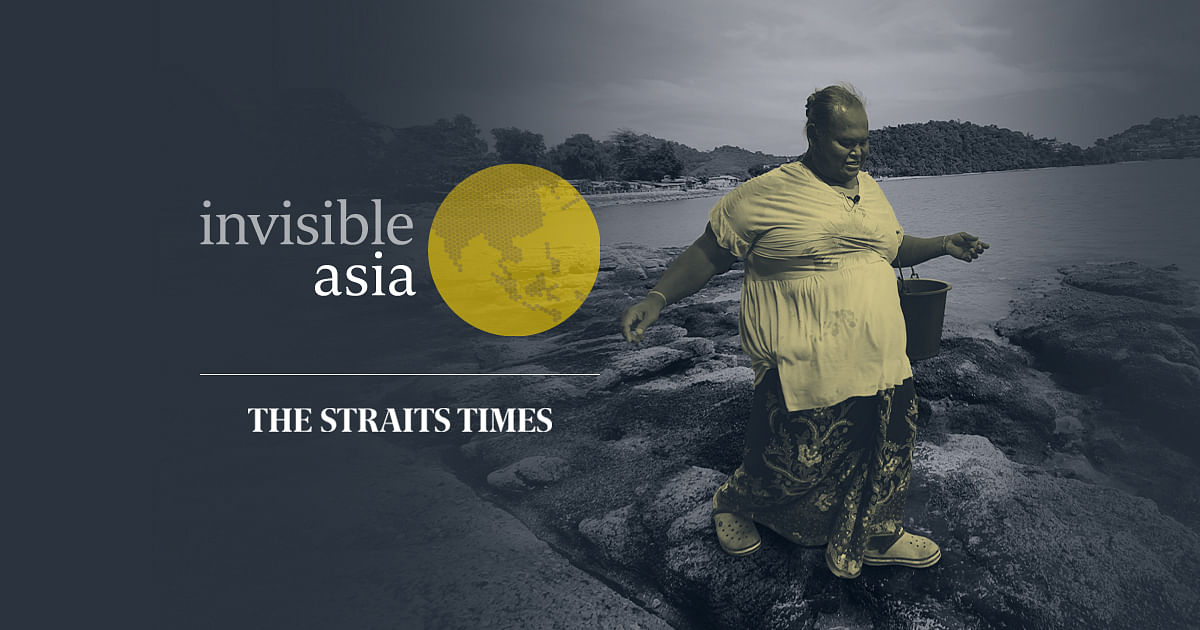 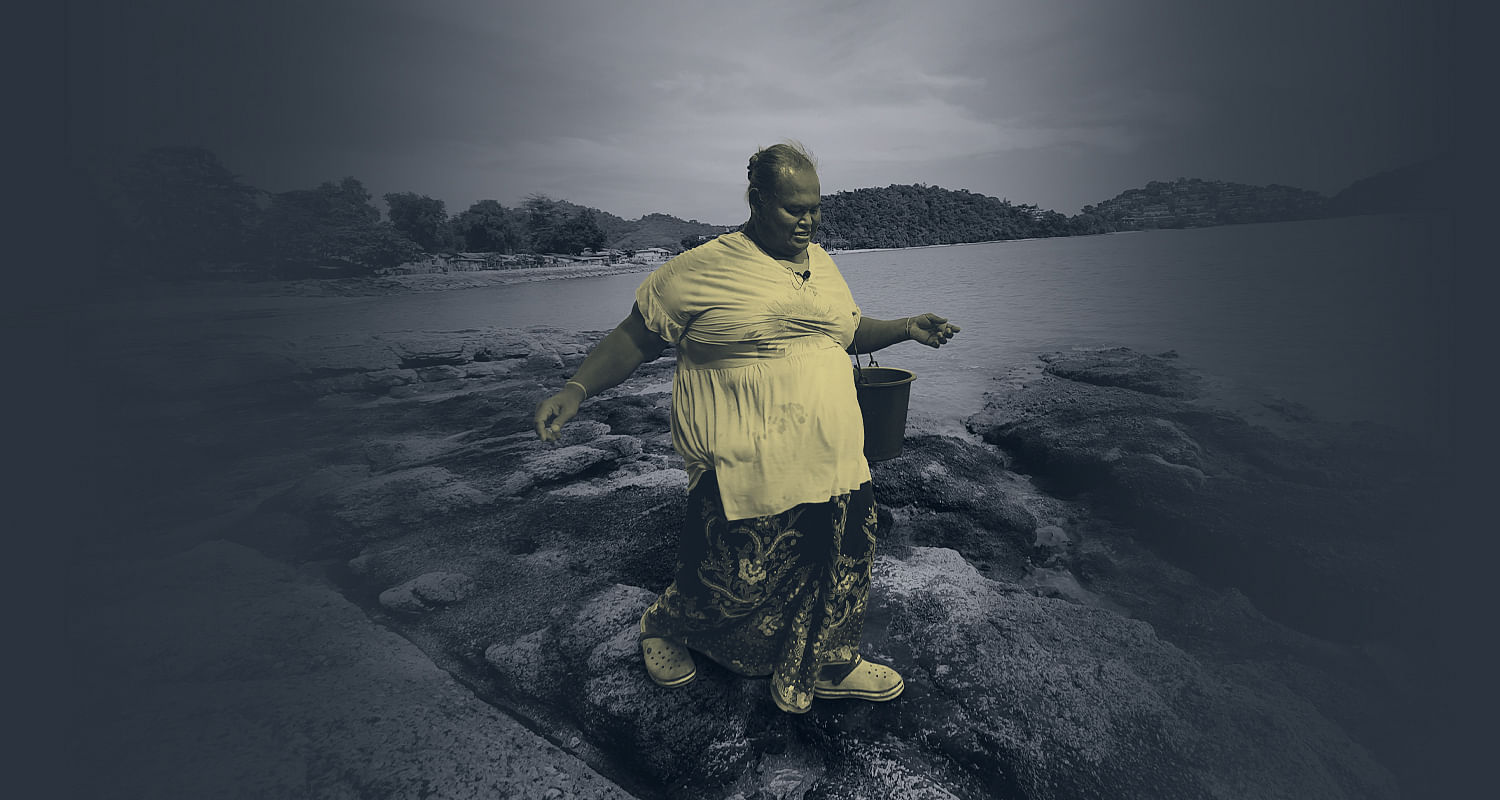 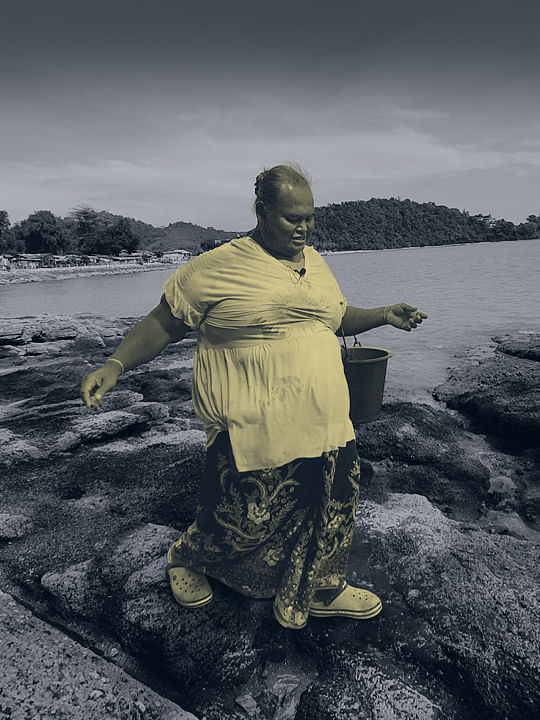 This is part of a weekly series of feature stories, videos and podcasts in which The Straits Times correspondents cast the spotlight on people and communities around the region who are living in the shadows of their societies where they exist largely unseen, unheard and little talked about.

PHUKET – The sun is overhead in southern Phuket when retreating waters expose crusty dark rock. Ms Jitti Pramongkit, dressed in a sarong and flowing pink blouse, clambers across the moonscape with a bucket in hand. She taps on a rock with a small pick-axe to dislodge a mussel.

“People accuse us of destroying rocks and nature. That’s not true,” says the 45-year-old Urak Lawoi, an aboriginal Malay from Thailand’s sea gypsy community. “This is our food and our livelihood. Scratching rocks like this does not harm nature. Mussels will regenerate.”

Shellfish have become increasingly important to her indigenous community’s survival these days, as the coronavirus pandemic continues to ground planes that used to bring foreign tourists, who would buy the seafood caught by members of her community or go sightseeing on boats they manned.

Jobless, many now pick mussels on the beach. In Ban Sapam, a village on eastern Phuket, families gather around sacks of mussels, shelling them for bulk sale at 100 baht (S$4.40) per kg of flesh to middlemen.

At the normally bustling Karon beach, white surf now breaks on undisturbed sand. Nearby streets are lined with shuttered shops and cafes.

In December, when holidaymakers from temperate countries normally surge into balmy Thailand, the number of tourists last year plunged by more than 99 per cent. Any prospect of a swift recovery is receding with the renewed outbreak.

Hidden in the corners of this glamorous island, where tar roads end in sandy tracts, are traces of a more quiet devastation.

Over 4,000 of Thailand’s 13,000 sea gypsies live on the resort island of Phuket. Their ramshackle wooden homes – tucked away by quiet shores and some of them standing next to ruins of houses destroyed by the 2004 tsunami – contrast starkly with the luxury hotels carved into the steep hills by the coast.

There are many laws hemming sea gypsies in. With every move that they make, they violate some law.
- Mr Chokdee Somprom of Chumchonthai Foundation

Sea gypsies on minimum wage as boatmen or labourers are grappling with the sudden loss of regular income, as well as the constant threat of movement restrictions due to the pandemic.

Their lives were already precarious before. For decades, they have fought a losing battle against both the wildlife authorities and resort developers to continue roaming the waters where their ancestors used to hunt as well as stay put in their coastal villages.

Like many of the estimated five million indigenous people in Thailand, the Urak Lawoi tend to struggle getting routine documents like house registration despite having lived in the country their whole lives. They have been forced to change their semi-nomadic lifestyles over the past decades.

“There are many laws hemming sea gypsies in,” says Mr Chokdee Somprom, the Andaman Sea area coordinator for community aid group Chumchonthai Foundation, which works closely on this issue. “With every move that they make, they violate some law.”

In the summer, when the seas are calm, Urak Lawoi men, and sometimes women, head out on their wooden longtail boats to fish. They inadvertently stray into national park waters, Mr Chokdee says.

The Thai state has ringfenced many parts of the Andaman Sea as protected areas – from Sirinat National Park in Phuket’s north-west to the popular diving destination of Mu Koh Similan National Park about 100km away.

“The catch found on their boats is used as evidence of poaching, even though some may have been caught outside the nature reserves.”

Increasingly stringent laws on the types of nets that can be used and size of fish that can be caught are lost on most of the Urak Lawoi.

“The laws are already complicated for us (regular citizens),” says Mr Chokdee. “So how would people who live most of their lives at sea, and have little education, be aware?”

Lowly educated and unfamiliar with the process of land ownership, some villagers became illegal squatters overnight in their longtime homes after private developers zoomed in on their coveted coastal plots. Others were thrust into a legal grey area after the government earmarked their longtime fishing grounds as protected zones.

Some disputes have turned violent. In 2016, dozens of men armed with sticks attacked sea gypsies who were trying to block property construction on Phuket’s Rawai beach that would cut off access to their ancestral shrines.

Despite a 2010 Cabinet resolution to respect the traditions of indigenous Karen and sea gypsies and grant them access to Thailand’s national parks, many of them struggle to get house registration documents – a prerequisite for water and electricity supply.

In Phuket’s Hin Look Diaw village which abuts a mangrove forest, locals say 36 households are tapping the power and water supply of just three homes. As heavy users are charged higher tariffs per unit, this makes their electricity more expensive.

Some people tell others to stay away from us. To them, we don’t belong… They are not sure if what we are selling is clean enough.
- Ms Jitti

The Department of Marine and Coastal Resources (DMCR), in a deal with three sea gypsy communities in Phuket, Ranong and Krabi provinces, as well as civil society groups People’s Movement for a Just Society, Community Organisations Development Institute and Chumchonthai, agreed to grant villagers the right to continue living in some 2.5ha of mangrove forest in return for their pledge to protect it.

It is the first step to security for a group little understood by mainstream Thai society. The Urak Lawoi were foraging and fishing in the Andaman Sea long before maritime boundaries were drawn up between Malaysia and Thailand. They speak a language similar to Malay that traditionally has no written form.

Invisible Asia: Who are the people who exist largely unseen, unheard

“Most of them decide to leave school after Grade 6. They feel they don’t belong there because they get bullied,” says Mr Chokdee. Families often struggle to find money for school uniforms and books. “They are mocked for being dirty or dressing poorly.”

The Urak Lawoi say Thais from the mainland sometimes mistake them as being from Myanmar or Malaysia.

In Phuket, they are often referred to as Thai Mai, or “new Thai” people. Mr Kochem Yahlong, a speedboat owner who before the pandemic hired Urak Lawoi to run the vessels, says: “The Thai Mai are similar to Myanmar and Indonesian people – they work harder than Thai people.”

Such acceptance is not readily found elsewhere, however.

“Some people tell others to stay away from us,” Ms Jitti says. “To them, we don’t belong, we are from some unknown tribe… They are not sure if what we are selling is clean enough.”

The transgender woman is a prominent Urak Lawoi leader in Phuket’s Ban Sapam community, despite dropping out of school after Grade 1.

Ms Patcharaphon Pramongkit, who is not related to Ms Jitti, dropped out of school after Grade 9, or Secondary 3, because her grandfather’s daily wage of 300 baht as a timber worker was not enough to put her through school. Her father hardly made any money from fishing.

“Other students in my school said sea gypsies were dirty because we cleaned ourselves with sea water, which is not true. But since we are the minority, we did not argue and kept to ourselves,” the 25-year-old, who is unemployed, told The Straits Times. “When we spoke our own language among ourselves, the teacher in school would stop us. ‘Don’t bring that language here,’ she would say.”

Ms Patcharaphon did odd jobs like sorting fish and crab at the market for 300 to 350 baht a day at the market after leaving school. But those jobs have dried up and she has been unemployed for the past two years.

Like the rest of the islanders on Phuket, the Urak Lawoi were subject to one of the most stringent lockdowns in Thailand in March last year at the start of the Covid-19 panic.

“After the lockdown, we could not sell our seafood because tourists were gone,” says Ms Jitti. “We used to sell our products to Thai people too, but they lost their jobs and could no longer afford them.”

Ms Jitti scrapes by on the 1,800 baht she gets every month in welfare payment and allowance as a public healthcare volunteer.

“I try to manage by eating simple meals,” she says.

Dr Pilaiwan Prapruit, an assistant professor at the Prince of Songkla University who has studied the Urak Lawoi community closely, laments the little thought that has gone into sustainable ways to integrate the Urak Lawoi into modern trade and tourism.

Having adjusted their subsistence lifestyles to supply tourists with seafood and seashell trinkets, they are now very vulnerable to big shocks like the pandemic, she says.

Aiming to add another 21,600ha to Thailand’s 278,400ha of mangrove cover, DMCR has hired some 20 of them to preserve and reforest mangroves and promote modern fishing methods, for 300 baht a day for one- or two-year terms.

“We have a long-term plan to help them find a better life and more security,” he says.

Despite the frequent conflict with developers seeking beachfront land for resorts, Ms Jitti hopes that tourists will eventually return to Phuket.

“We want tourists to come and see our way of life, and buy souvenirs from us,” she says.

But resort developers must first learn to co-exist with sea gypsy communities instead of pushing them out.

“We have always lived here, so they have to make space for us.”