In its editorial, the paper says that the international community must put greater pressure on authorities in Myanmar, as well as give material assistance to Bangladesh.

Following growing international pressure on Myanmar's leadership over its treatment of the Rohingya Muslim population, the subsequent refugee crisis the most recent crackdown created, and the inability to ensure a safe climate for return, the delegation's mission was to again try and convince the Rohingya to go back.

Approximately 700,000 Rohingya escaped from the extreme violence unleashed on them by the authorities in Myanmar between August 2016 and December 2017, as they settled in squalid refugee camps in neighbouring Bangladesh.

Another 16,000 entered the country in 2018. Currently, there are over one million Rohingya refugees inside Bangladesh, which is struggling to accommodate them and has voiced its concerns several times at international forums.

However, it has also said that it will not force the Rohingya to go back against their will.

Nearly two years ago, the two countries signed a repatriation agreement. And yet, not a single Rohingya has expressed any willingness to return to his or her homeland.

It is not hard to see why the community is afraid. While the Rohingya may have been born in Myanmar, the country can hardly be described as home. 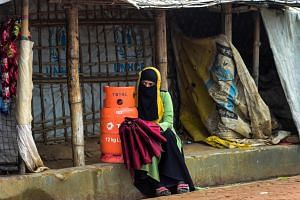 One year on, Rohingya refugees struggle on the edge of the abyss

Human rights groups have described the internment camps in Rakhine state, where around 400,000 Rohingya continue to live, as an 'open-air prison'. Their movement is heavily restricted, but their plight is not new.

Since the 1970s, the Rohingya were collectively and cruelly deprived of their citizenship status by Myanmar. Since then, they have effectively been rendered stateless, the root cause of their plight.

The Rohingya are not even listed in Myanmar's 135 official ethnic groups, and are instead referred to as 'Bengali', highlighting their outsider status. Given the label of the 'world's most persecuted minority', they have no rights to speak of and no place to call home.

Rohingya community elders have made it clear that they will not return to Myanmar until their security and dignity can be ensured. However, until they are granted citizenship, it is unlikely that their dignity will ever be upheld.

While putting greater pressure on the civil and military authorities in Myanmar to stop their persecution of the Rohingya, the international community must also give material assistance to Bangladesh, which has almost single-handedly taken on the mammoth responsibility of handling a human crisis it had no part in creating.