People may think that warning is more of the usual, but something in the report should concern Filipinos in particular: In about three decades, the Philippines could find many of its coastal areas, including those surrounding Manila Bay, underwater due to the effects of climate change.

The research, produced by science organisation Climate Central and published in the open-access journal Nature Communications, said 150 million people - three times more than was previously estimated - could potentially be displaced by 2050, or up to 300 million by the end of the century if climate change is not mitigated.

The number of people affected, it further warned, could rise to 480 million by 2100.

The study identified the Philippines as one of the countries most vulnerable to flooding. "…We find that more than 70 per cent of the total number of people (live) on implicated land area in eight Asian countries: China, Bangladesh, India, Vietnam, Indonesia, Thailand, the Philippines and Japan," it said.

Which parts of the Philippines? As shown in a map simulation on the Climate Central website, parts of Manila, Malabon, Bulacan, Valenzuela and Pasay City (narrowly missing the Ninoy Aquino International Airport where it stands now) will be below sea level in 30 years.

Other areas that will be affected include parts of Roxas and Iloilo cities in the Visayas, and Cotabato, Surigao and Butuan in Mindanao.

This could directly impact at least 8.6 million Filipinos living in these areas. And with Manila and Pasay underwater, the new shoreline is projected to be in - imagine this - the Edsa-Magallanes area in Makati.

What happened in Venice, Italy, about two weeks ago is but the latest warning of the severe threat of rising seas due to climate change. 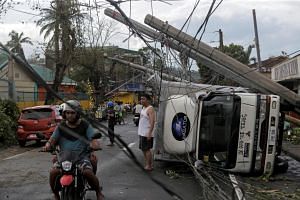 Flights between Singapore and the Philippines affected by Typhoon Kammuri

Venice, which sits in the middle of a lagoon at the edge of the Adriatic Sea, experienced not only its worst flooding in 50 years; according to LiveScience.com, quoting BBC meteorologist Nikki Berry, "Of the 10 highest tides in Venice since record-keeping began in 1923, five have occurred in the last 20 years, including the current flood and one in 2018."

The calamitous "acqua alta" (high tide) penetrated St Mark's Basilica and caused considerable damage to one of the world's most famous landmarks - only the sixth time the church was flooded in 1,200 years, again with four of those floods happening in the last 20 years.

Venice Mayor Luigi Brugnaro was clear about the culprit: "These are the effects of climate change," he said in a tweet. "The costs will be high."

Another report, "Climate tipping points - too risky to bet against," written by a group of experts from Europe and Australia and published last week in Nature magazine, outlined tipping points and how exceeding them could result in a domino effect that would be catastrophic for the planet.

These tipping points include ice collapses in West and East Antarctica and in Greenland that could add anywhere between three and seven meters to the sea level, and which could happen as early as as 2030 - 11 years away - if global warming is at 1.5 degrees Celsius.

"We might already have committed future generations to living with sea-level rises of around 10 meters over thousands of years," the authors said.

The rising temperature, the Nature report warned, could destroy entire ecosystems and, in fact, has already destabilised the Amazon, the world's largest rainforest and home to 10 percent of the world's species.

Evidence suggests that "we are in a state of planetary emergency," and the intervention period left to prevent irreparable damage to the planet has "already shrunk towards zero, whereas the reaction time to achieve net zero emissions is 30 years at best."

The Philippines is in the direct path of environmental devastation, so it's startling to learn that, for one, the Duterte administration had suspended a $36-million loan from Germany to fund climate change studies, according to Mongabay, a nonprofit environmental science and conservation news platform.

It said negotiations bogged down after President Duterte bristled against foreign scrutiny on his human rights record. The Department of Finance is reportedly looking for alternative fund sources.

In just about three decades, Metro Manila and other coastal cities may well see millions of its residents displaced and forced to forge new ways of living as the seas flood in and reconfigure the land - a development with far-reaching consequences for the Philippines' economy, food and resource security, and social stability.

What is the country and its government doing to prepare for such an upheaval?

The Philippine Daily Inquirer is a member of The Straits Times media partner Asia News Network, an alliance of 24 news media organisations.