In his column, the writer says that the measure of lowering the minimum age of criminal responsibility in the Philippines is atrocious in itself, but in the context of the Duterte administration's deadly war on the poor, it must be understood as a monstrosity, as nothing less than evil.

MANILA (PHILIPPINE DAILY INQUIRER/ASIA NEWS NETWORK) - It is no secret that the lowering of the minimum age of criminal responsibility in the Philippines - from 15 to 9 years old - was one of the core promises of the Duterte presidential campaign.

Just how central is it to the administration's approach to governance?

"I attended a meeting with the Juvenile Justice Welfare Council. I just reminded the secretaries that they are the alter-ego of the President. Now if they don't agree with the President on the lowering of the minimum age, they might as well tender their resignation," Mr Alvarez said.

To be sure, Mr Alvarez issued this threat when he was still riding high politically; in February 2017, the factionalism in the administration's inner circles had not yet claimed him as its most prominent victim.

In other words, he was speaking as the president's real alter ego, signalling to allies and enemies alike that this particular policy had Mr Duterte's personal support.

Like other items on the president's real agenda, such as constitutional change, the campaign to lower the minimum age of criminal responsibility took legislative form on the very first day of the administration.

For such a consequential initiative, with dangerous implications for the treatment of children in conflict with the law, HB 505 is badly written and appallingly reasoned.

There isn't a single justification offered for the lowering of the minimum age in the bill itself. Literally, zero.

And what we find in the explanatory note is a mishmash of points, lazily lumped together. None of it makes sense. 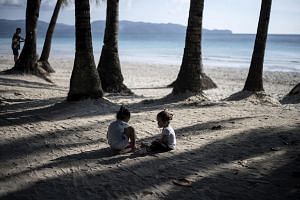 The terrible grammar is telling; this bill which proposes to criminalise millions of children between 9 and 15 years old was clearly written without care.

"Children in conflict of law (sic) at present grow in number. Sad to say, the minors are getting bolder and braver. These young people has (sic) emboldened themselves and criminal syndicates has (sic) capitalised on the age 15 (sic) as being free for (sic) criminal liability."

The logic is blithe and cruel.

"The age of minors involved in crimes is getting younger. They are prey to unscrupulous and ruthless criminal syndicates. This representation believes in the restorative system of justice, thus (sic), lowering the age of criminal responsibility."

How can this bill be even remotely "restorative," when it presumes to treat children as young as 9 as criminals, rather than the victims, the "prey," to use its own language, of predatory criminal syndicates?

And the hypocrisy is revolting; it isn't a matter of manners, but morals.

"More so, it is provided in the Constitution that the state recognises the vital role of the youth in nation building and thus, shall promote and protect their physical, moral, spiritual, intellectual and social well-being."

As an ethical issue, it is plain to see that criminalising a 9-year-old will not in fact "promote and protect" that child's well-being. Precisely because the 9-year-old is still a child.

If lowering the minimum age of criminal responsibility was a core promise of President Duterte, why did it stay stuck at the committee level for two and a half years?

For the same reason other priorities on his agenda, again such as constitutional change, got delayed; Mr Alvarez's Congress - not too efficient to start with - spent too much time persecuting the president's enemies, including Senator Leila de Lima and Chief Justice Maria Lourdes Sereno.

Ms Arroyo is a staunch opponent of the death penalty, and lost her deputy speakership when she voted against it; why would she now green-light a bill that her friends among the country's Catholic bishops deem fundamentally un-Christian?

It seems to be part of the negotiations between the president's political allies and Ms Arroyo's own bloc, a means of easing tensions and fostering coalition unity after the very public fight over the budget.

But unity at what cost?

Ms Arroyo may be relying on the Senate to block the measure; that is a risky wager.

The country, however, is now one fateful step closer to criminalising an entire generation of children-at a time, during an administration, when older but well-connected accused are given special treatment; when middle-aged drug lords the president personally knows are unaccountably beyond the reach of the law; when young innocents - mere suspects - are slaughtered in the streets.

The measure is atrocious in itself, but in the context of the Duterte administration's deadly war on the poor, it must be understood as a monstrosity, as nothing less than evil.

All children, not only those preyed on by criminal syndicates, now have to contend with another horde of predators: the monsters in the House.