In this editorial, the paper says that in shutting down the Bangkok panel on the Rohingya crisis, the junta has further damaged Thailand's international standing.

BANGKOK (THE NATION/ASIA NEWS NETWORK) - Police on Monday evening stormed into the Foreign Correspondents Club of Thailand (FCCT) and ordered a panel discussion on the Rohingya crisis to be shut down.

The intervention was callous and short-sighted, inflicting more damage to Thailand's erstwhile but rapidly diminishing reputation as beacon of free expression in Southeast Asia.

The military top brass who ordered the raid and the police who carried it out may have thought their actions were helping Thailand.

Nothing could be further from the truth.

The panellists had gathered to discuss whether senior generals in Myanmar should face international justice for what a recent UN fact-finding report called genocide committed by their security forces against the Rohingya and other minorities.

The scheduled speakers included Mr Tun Khin, a prominent UK-based Rohingya activist; Mr Kobsak Chutikul, a former Thai diplomat who had resigned from a committee advising the Myanmar government on how to resolve the Rohingya crisis; and Mr Kingsley Abbott, a representative of the International Commission of Jurists (ICJ).

More than 700,000 Rohingya were forced to flee their homes and cross the border to Bangladesh after Myanmar security forces, with the help of civilian vigilantes, launched a campaign of rape, murder and arson against them in Rakhine state.

The government justified these "clearance operations" as a crackdown, after a rag-tag group of militants known as the Arakan Rohingya Salvation Army launched a deadly attack in August 2017.

These are far from the first credible allegations of war crimes to be levelled against the Myanmar military. 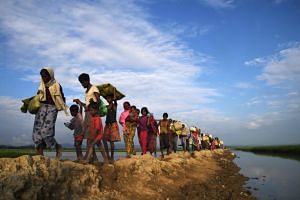 A decade ago the findings in "Licence to Rape", a report by the Shan Women Action Network, were backed by a number of foreign governments and international organisations. Today, almost the entire international community is calling for Myanmar's generals to face justice for the Rohingya calamity.

The silence among policymakers in neighbouring Thailand is ever-more deafening.

Police argued that the FCCT panel discussion "Will Myanmar's Generals Ever Face Justice for International Crimes?" had to be cancelled since Thailand's national security and neighbourly relations were at stake.

In doing so they chose to ignore the genocide that has befallen one million Rohingya, either murdered or forced into refugee camps. Their decision to side with brutal military leaders also places Thailand's international standing at risk.

"We are not asking, we are ordering you to cancel the event," Police Colonel Thawatkiat Jindakuansanong told the panel's organisers. This was the sixth time police have shut down an FCCT event since the latest crop of junta generals seized power four years ago.

"This is an issue of global concern and Thailand, as Myanmar's neighbour and a leading voice in Asean, should be taking a leadership role in addressing the situation," Mr Abbott, a senior legal adviser with the ICJ, noted of the Rohingya crisis.

Last month Thai authorities called off an event at a mosque in Pathum Thani commemorating the one-year anniversary of the massacre of the Rohingya.

Like Monday night's intervention, authorities thought they were saving Thailand from a possible falling-out with Myanmar government.

Seemingly forgotten by them is the long humiliation over border security that these Myanmar generals have put Thailand through.

The influx of narcotics from pro-Myanmar drug armies, plus the exodus of Karen and Mon refugees into Thailand as they fled Myanmar troops' atrocities, are notable examples.

While it is true that bilateral ties have improved recently between the two countries, Thailand continues to be at the receiving end of Myanmar's actions against its minorities.

In seeking to not rock the boat with a genocidal military next door, Thailand's junta government has damaged the country's international standing and done nothing to resolve a regional catastrophe on its doorstep.