In its editorial, the paper praises US President Donald Trump's administration for being the first country to publicly take action against Myanmar military leaders, but questions if the sanctions will lessen the persecution of Rohingyas.

NEW DELHI (THE STATESMAN/ASIA NEWS NETWORK) - Aung San Suu Kyi, who has maintained a rather intriguing silence on the persecution of Rohingyas, ought to draw a lesson from America's decision to crack the whip with what they call "individual sanctions".

Last Wednesday's (July 17) plan of action is of a piece with the certitudes of what has been reckoned as one of the world's most celebrated democracies.

The fountainhead of democracy has eventually reacted to its degeneration in Myanmar since the early 1990s.

An elected government, technically helmed by Suu Kyi albeit not as President, has lamentably failed to address what the UN has called the "worst humanitarian crisis" since the Second World War.

Nay more, the United Nations has labelled the attacks as "genocide", underlining that General Min Aung Hliang and other top Generals should face trial in an international court.

But till Wednesday, no action had been taken against them by any member of the comity of nations.

The decision of the Trump administration to impose sanctions on Myanmar's top military commander, General Hlaing, and three highest-ranking generals must, therefore, be viewed in the context of the relentless strife in the country and most tragically in the border state of Rakhine, near Bangladesh, from where the Rohingyas have been reduced to "nowhere men".

The crippling curbs symbolise a strategic strike against the army, which since the 2015 election has been calling the shots from behind a nominally democratic facade.

Indeed, one major reason why Suu Kyi has been muted in her response vis-a-vis the Rohingya persecution is that she has been loath to rock the military boat. 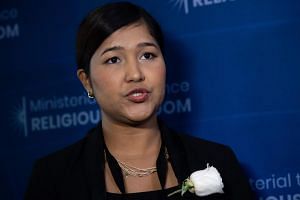 The signal emitted by the US sanctions, indeed the reprisal, cannot but resonate in the omnipotent GHQ in Naypidaw.

Chiefly, the four Generals and their immediate families will be barred from entering the United States, going by the statement of the Secretary of State, Mike Pompeo.

The inconvenience thus caused to the key figures of the military is bound to impact the morale of the force in the wider canvas.

The US reprisal is particularly crucial as it is the first country to "publicly take action with respect to the most senior leadership of the Myanmarese military", to quote the statement of Mr Pompeo.

It would be useful to recall that two years ago, brutal attacks by the military and Buddhist monks had forced 700,000 members of the Rohingya ethnic minority, a predominantly Muslim segment, to cross the border into Bangladesh, there to languish in squalid refugee camps.

The State Department has now imposed the ban as it could do so unilaterally. Furthermore, the ultimate objective is to hold individual Generals accountable for the atrocities.

It is open to question whether the sanctions will have a practical effect not the least because the top brass of Myanmar's military is not known to travel to the US.

The ultimate test must be on whether the sanctions will lessen, if not end, the persecution of Rohingyas.