In its editorial, the paper says that the report highlights that a large part of the contraction in the country's external account is due to collapsing demand in industry and agriculture.

ISLAMABAD (DAWN/ASIA NEWS NETWORK) -The last fiscal year was one of the toughest for Pakistan, and the challenges are far from over.

This was the gist of a recent annual report by the State Bank of Pakistan regarding Financial Year 2019.

Coming almost four months after the fiscal year concluded, the report remains timely for the important lessons it has for the present, particularly the insights it shares on why the investment scenario remains so dismal.

Last year's record high fiscal deficit of 8.9 per cent of GDP was the result of unrealistic targets set by an outgoing government, according to the bank. A poor revenue mobilisation effort combined with weak expenditure control contributed as well.

The unrealistic targets can be attributed to politics, since an outgoing government was hardly incentivised to leave behind a robust revenue plan, although the drafters of that budget will argue that the innovative thinking around which the numbers were built never found acceptance with the new dispensation.

That debate notwithstanding, a big takeaway from the report is the narrowness of the state's revenue machinery and the enormously ambitious revenue drive that the government has launched.

In large part, for example, last year's weak revenue performance stemmed from the failure to mobilise new revenues via two mini-budgets, as well as the politically motivated reductions in sales tax and surcharge on fuels, particularly petrol and diesel.

Whether or not one agrees with the government's decision to try and protect the masses from fuel price increases, it is hard to disregard the fact that, given the inflation levels today, the decisions were shortsighted and failed to accomplish their stated purpose.

A close reading of the report shows the importance of restoring fiscal discipline, and in equal measure of broadening the tax base. 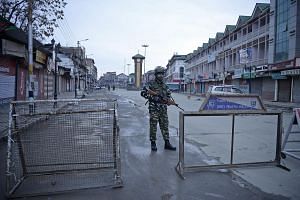 Thousands rally in Pakistan to demand Imran Khan step down

These are the two principal challenges the government is currently working on. Although it is proving to be a difficult path to walk, having chosen it the government has little choice but to persevere.

Besides the fiscal situation, the report highlights the near-calamitous state of industry and agriculture, and clearly says that a large part of the contraction in the external account is due to collapsing demand in both these sectors, which between them account for more than half the size of the economy.

Therefore the contraction in the current account deficit is hardly something to be celebrated since it is being achieved by strangulating the economy, and agriculture has suffered strong water shortages on top of high input prices.

The investment climate is mired in high levels of informality that draw in investible resources, preventing productivity gains.

With these weaknesses, the current account deficit will simply reappear with the return of growth.

The need for deep and urgent structural reforms could not be more clear.