SEOUL (AFP) - South Korean President Moon Jae In sat next to the powerful sister of the North's leader Kim Jong Un at a concert in Seoul by musicians from Pyongyang, as conservative protesters burned the North's national flag outside on Sunday (Feb 11).

The show was the final set-piece element of the North Korean delegation's landmark visit, the diplomatic highlight of the Olympics-driven rapprochement between the two halves of the peninsula, and they flew back home afterwards.

They have shared kimchi and soju with Moon, sat in the same box at the Olympics opening ceremony and cheered a unified women's ice hockey team together.

Kim on Saturday (Feb 10) invited Moon to a summit in the North, an offer extended by his sister and special envoy Kim Yo Jong, who made history as the first member of the North's ruling dynasty to visit the South since the Korean War.

Moon did not immediately accept the invitation and has said he hopes the "right conditions" will be created so it can go ahead.

Pictures showed Yo Jong seated between Moon and the North's ceremonial head of state Kim Yong Nam, who is officially leading the North's delegation, and applauding at Sunday's concert.

The show by Pyongyang's Samjiyon Orchestra featured a surprise appearance by Seohyun, of top South Korean K-pop girl band Girls Generation. It was part of a cross-border deal in which the isolated nuclear-armed North sent hundreds of athletes, cheerleaders and others to the Pyeongchang Winter Games in the South.

At an earlier dinner with senior Seoul officials, Yo Jong said she found the two Koreas still had much in common despite decades of separation.

Before flying south, she said, she had expected "things would be very different and unfamiliar", according to a statement from Moon's office. 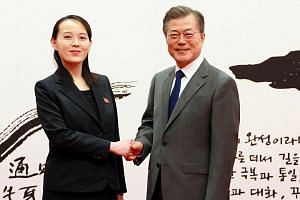 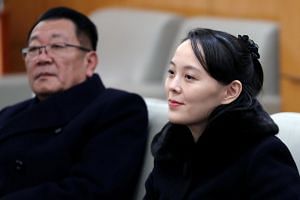 "But it turned out that there were many things similar and in common," she went on. "I hope that the day we become one will be brought forward."

But the rapprochement pushed by the dovish Moon has angered conservatives, who accuse him of being a North Korea sympathiser and undermining the security alliance with the US.

"Having these red communists in the heart of Seoul is an utter humilation!" one shouted near the venue as dozens of others waved banners condemning both Moon and Kim Jong Un.

"We are against the ugly political Olympics!" read one banner.

Some set a North Korean flag on fire before police intervened, and others chanted "Let's tear Kim Jong Un to death!" as they ripped up posters bearing his portrait.

The North's presence has dominated the headlines in the early days of the Olympics, with all eyes turning to Swiss-educated Kim Yo Jong, believed to be 30, who is among her brother's closest confidantes.

Sunday's 100-minute concert - the orchestra's second and final show - included about 40 songs, among them South Korean pop hits as well as North Korean and other world music.

Seoul's TV shows and K-pop songs are smuggled across the border with China and known to be popular among many North Koreans despite the risk of severe punishment.

At one point Hyon Song Wol, the leader of the North's popular Moranbong girlband, took the stage to perform a unification-themed song.

Public interest in the show was huge, with nearly 120,000 people applying for just 1,000 tickets.

Civilian contact is strictly banned between the two Koreas, which have been divided since the 1950-53 Korean War ended with an armistice instead of a peace treaty.

Tensions soared last year as the North staged a series of nuclear and missile tests in violation of UN resolutions, while leader Kim and US President Donald Trump traded colourful insults and threats of war.

Moon has long sought engagement with the North to bring it to the negotiating table, and for months has promoted Pyeongchang as a "peace Olympics".

But controversy over the North's participation - particularly the formation of a unified women's ice hockey team, seen as unfairly denying Seoul's own citizens a chance to compete on the Olympic stage - has hit his approval ratings.

Many older South Koreans on both sides of the political divide harbour a nostalgic longing for some form of reunification - conservatives through the North's collapse, liberals through a more amicable arrangement.

But younger South Koreans have spent their adult lives in a culturally vibrant democracy regularly menaced and occasionally attacked by Pyongyang. They have far less interest in unification and fear its social and economic consequences.

A poll last year found almost 50 per cent of over-60s believed the two Koreas can be reunified, while just 20.5 per cent of those in their 20s agreed.