An attack Thursday (Feb 14) on a military convoy in Jammu and Kashmir where India has been battling an insurgency killed 44 paramilitary troops. It was the worst in decades and comes just months before Prime Minister Narendra Modi's ruling Hindu nationalists face a tight general election.

Modi has promised a strong response to the car bombing which his government blamed on Pakistan, ratcheting up tensions with the nuclear-rival.

At the heart of the dispute is Kashmir which has been divided between nuclear-armed Indian and Pakistan since 1947 but is claimed in full by both.

The two nuclear-armed neighbours have waged two wars over Kashmir. India is estimated to have up to 500,000 troops stationed in the region.

How old is this fight?

Even before India and Pakistan won their independence from Britain in August 1947, Kashmir was hotly contested.

Under the partition plan provided by the Indian Independence Act, Kashmir was free to accede to India or Pakistan. 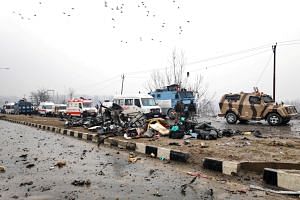 A new war followed in 1965, while in 1999 India fought a brief but bitter conflict with Pakistani-backed forces.

By that time, India and Pakistan had both declared themselves to be nuclear powers.

Why so much unrest inside the Indian part?

Many people in the territory do not want it to be governed by India, preferring instead either independence or union with Pakistan.

The population of the Indian-administered state of Jammu and Kashmir is more than 60 per cent Muslim, making it the only state within India where Muslims are in the majority.

High unemployment and complaints of heavy-handed tactics by security forces battling street protesters and fighting insurgents have aggravated the problem.

Weren't there high hopes for peace in the new century?

India and Pakistan did indeed agree a ceasefire in 2003 after years of bloodshed along the de facto border (formally known as the Line of Control).

Pakistan later promised to stop funding insurgents in the territory while India offered them an amnesty if they renounced militancy.

Then, in 2014, a new Indian government under Modi, a Hindu nationalist, came to power promising a tough line on Pakistan.

The last major attack in Kashmir was in 2016 when militants raided an Indian army camp in Uri, killing 20 soldiers. Modi responded with a surgical strike on suspected militant camps across the border in Pakistan Kashmir weeks later.