In her commentary, the writer says admission criteria shouldn't be subjective and those who seek fairness should ensure its application elsewhere too

ISLAMABAD (DAWN/ASIA NEWS NETWORK) - Every nerd secretly (and some not so secretly) dreams of getting into Harvard University.

Often, the nerd's parents share the dream, shelling out wads of cash for special lessons, private tuitions, even admission coaches to make it all happen.

Desis, far as they may be from Cambridge, Massachusetts, nurse the dream too; wealthy Indians and Pakistanis are all eager to send their precious progeny to the best-known university in the world.

The Pakistanis who have made it to the United States push even harder; the displacement of migration is supposed to amount to something, and having one's children attend Harvard would be just that something, a salve for the wounds of leaving home.

To this end, they goad their children to get perfect scores and perfect grades, all the while nurturing the sort of distinctive hobby or fascinating extracurricular activity that will distinguish their application from thousands of others that are similarly perfect.

It is not working out well.

According to the New York Times, Asian-Americans (including Pakistani-Americans) are suing Harvard for unfairly refusing admissions to Asians on subjective grounds. 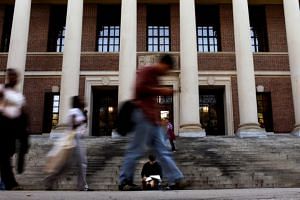 Harvard is wrong that Asians have terrible personalities

The lawsuit, filed by an organisation called Students for Fair Admissions, alleges that if Harvard stopped using race-based criteria for admissions, the percentage of Asians at the university would be significantly higher.

In simple terms, African-Americans and Hispanics who are not as well represented as whites and Asian-Americans can gain admission into Harvard with lower test scores and grades.

Other universities, such as the California Institute of Technology, which does not use race-based criteria for admissions, saw the percentage of Asian-Americans rise from 19 per cent in 1998 to 43 per cent in 2013.

Harvard and the secretive admissions process, the lawsuit alleges, is designed to artificially engineer the percentage of Asian-Americans at between 12 per cent to 18 per cent, even if a greater percentage is qualified.

Harvard and other Ivy League schools have publicly admitted that they use a 'holistic' method to evaluate a student's overall qualification. The Students for Fair Admissions lawsuit alleges that 'holistic' is code for prejudicial, where subjective aspects such as the evaluation of the applicant during the interview process is used to exclude them.

In simple terms, an Asian-American (and the lawsuits include Korean, Chinese, Pakistani and Indian students) who has a perfect SAT score, was at the top of her class, excelled at a sport and showed leadership potential during her high school career can be rejected on the basis that she did not seem 'likeable' in the interview.

In the latest round of sparring between the university and the purveyors of the lawsuit, the latter demanded that Harvard make the records of its secretive admission process available to the public. Everyone, they asserted, should be able to see how this top institution rigs admissions such that Asians are left out.

Harvard and the other Ivy League institutions are obviously not going to reveal anything at all about their admissions process unless they are forced to do so in a courtroom.

In their favour are affirmative-action policies that allow institutions to consider race as a factor, particularly in the case of underrepresented minorities.

In simple terms, African-Americans and Hispanics who are not as well represented as whites and Asian-Americans can gain admission into Harvard with lower test scores and grades.

The heavily contested situation has led people to question whether the United States and particularly Harvard, both of which insist they are meritocracies, where anyone and everyone qualified can join the world's most brilliant people, are no longer so.

Some of the plaintiffs involved in the Students For Fair Admissions lawsuit have done crazy things to prove this point.

One of them, the brother of comedian and actor Mindy Kaling, Vijay Jojo Chokalingam, pretended to be African-American in order to get admission into medical school.

In his own words, written down in his book Almost Black, Jojo speaks of how he realised his grades in college were not good enough to get into medical school. Instead of giving up, Jojo, who is dark-skinned, pretended to be African-American. He got in.

The technique of pitting minorities against minorities is, of course, an old technique used by colonial masters long before it was deployed by Ivy League American universities. It is in play here as well.

The lawsuit against Harvard demands the abolishment of race as a criterion in college admissions, which means an attack on quotas that are reserved unofficially for African-Americans and Hispanic students.

There is a better way.

The subjective criterion, likability and personality, judged in interviews should either be eliminated or be made non-binding. It is too easy to like only those people who share language and heritage.

The conclusion above is ironic indeed.

Even while South Asians rail and rage against the unfairness of affirmative-action quotas in American universities, all of them, Pakistanis and Indians, continue to support exactly the same kind of cronyism at home.

In Pakistan, where only the absolutely best and brightest can aim to make their way to Harvard, preferences based on caste and colour and connections prevail unchecked.

Even while everyone wants to get into Harvard, demand fairness from that foreign institution, nearly no one is interested in deploying those same policies at home.

The writer is an attorney teaching constitutional law and political philosophy.