GENEVA • The World Health Organisation (WHO) has said that one strain of a Covid-19 variant first detected in India is now considered "of concern" and has been dubbed "Delta", while two other strains have been downgraded.

The B1617 variant of the virus, which has in part been blamed for India's explosive outbreak, has been called a triple mutant variant since it is split into three lineages.

The UN health agency last month declared the entire strain a "variant of concern", or VOC. But on Tuesday, it said only one of the sub-lineages deserved that label.

"It has become evident that greater public health risks are currently associated with B16172, while lower rates of transmission of other lineages have been observed," it said in its weekly epidemiological update.

The B16172 variant remains a VOC, along with three other variants that are seen as more dangerous than the original version because they are more transmissible, deadly or have the potential to get past some vaccine protections.

In line with a decision announced on Monday to refer to variants of concern and interest using Greek letters - aimed at avoiding the possible stigmatisation associated with referring to them by the name of the countries where they were first detected - the B16172 variant has now been dubbed Delta.

"We continue to observe significantly increased transmissibility and a growing number of countries reporting outbreaks associated with this variant," the UN agency said. "Further studies into the impact of this variant remain a high priority for WHO."

In fact, a new variant announced by Vietnam's health authorities last Saturday appears to be a variation of Delta.

"What we understand is that it is this B16172 variant with one additional deletion in the location of the spike protein," WHO's technical lead on Covid-19, Dr Maria Van Kerkhove, told reporters on Tuesday. "We know that the Delta variant does have increased transmissibility, which means it can spread easier between people."

The B16171 sub-lineage has, meanwhile, been downgraded to a "variant of interest" and named Kappa. 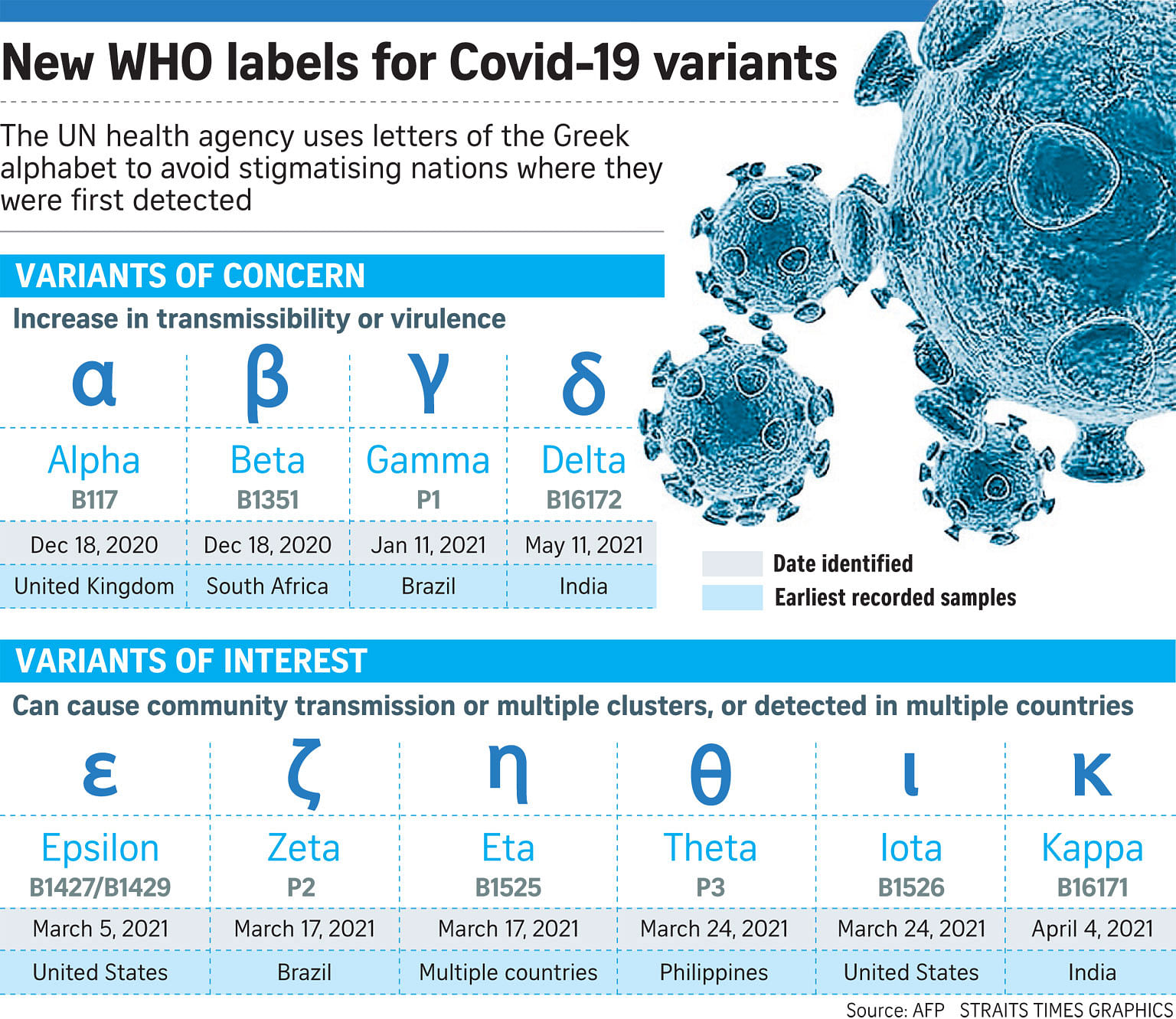 It has become evident that greater public health risks are currently associated with B16172, while lower rates of transmission of other lineages have been observed.

And the B16173 is now not even considered a variant of interest, the WHO said, since "relatively few reports of this variant have been submitted to date".

It has also not been attributed a Greek letter.

New WHO labels for Covid-19 variants

A version of this article appeared in the print edition of The Straits Times on June 03, 2021, with the headline 'WHO says Delta variant is of concern'. Subscribe
Topics:
More
Whatsapp Linkedin FB Messenger Telegram Reddit WeChat Pinterest Print Copy permalink