ISLAMABAD, PAKISTAN (WASHINGTON POST) - A first possible breakthrough in the 17-year Afghan conflict came in June, when a brief ceasefire during a Muslim holiday produced a spontaneous celebration by Afghan troops, civilians and Taleban fighters. The nationwide yearning for peace became palpable.

Now, in a development that could build on that extraordinary moment, a senior American diplomat and Taleban insurgent officials have reportedly held talks for the first time, meeting in the Persian Gulf state of Qatar and agreeing to hold further sessions. According to Taleban officials, they discussed reprising the truce in August.

Officials in Washington have not acknowledged the meeting, but the State Department confirmed that its senior official dealing with the Afghan region, Ms Alice Wells, travelled last week to Doha, the Qatari capital, partly to "commend the government" for its "ongoing support for peace in Afghanistan".

"Our view on this (is) if you can get a ceasefire that lasts a few days, perhaps you could get another one that lasts a bit longer, and that gives the people of Afghanistan hope," State Department spokeswoman Heather Neuart said on Monday (July 30).

Taleban officials were more expansive. One told journalists that the meetings in a Doha hotel had produced "very positive signals".

He declined to call them peace talks but said they were held to "initiate formal and purposeful talks", the Reuters news agency reported. 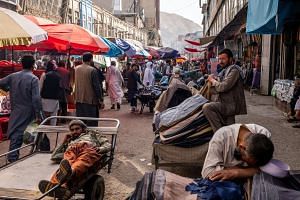 "We agreed to meet again soon and resolve the Afghan conflict through dialogue," the official said.

The meeting was remarkable, notably for who was there and who was not. The Taleban said there were no officials or representatives from the Afghan government, which has always publicly taken the lead in peace initiatives with the insurgents.

It was Afghan President Ashraf Ghani who offered a ceasefire in June, at the end of Ramadan, the Muslim holy month, but his previous efforts at holding peace talks since taking office in 2015 have failed.

It was even more extraordinary that the Trump administration pursued a bilateral meeting with the insurgents, a step that amounted to a major concession and indicated how eager US officials are to end the costly war.

Taleban leaders have insisted for years that they will negotiate only with the United States, and their major condition for peace is that all foreign forces withdraw.

Until recently, US officials had insisted that all negotiations be "Afghan-owned and Afghan-led", and the Trump administration's policy has stressed military efforts - sending a limited number of US troops to train and advise Afghan forces fighting the Taleban, while sending Special Operations forces to wage a joint parallel war against the Islamic State in Iraq and Syria (ISIS) and other foreign terrorist groups.

But as the relentless war continues, causing record civilian casualties and leaving large areas under Taleban control or influence, US officials have expressed increasing frustration and willingness to explore new approaches.

Secretary of State Mike Pompeo said several months ago that the administration would be willing to participate in talks with the Taleban, and even discuss the future role of US forces.

The successful ceasefire in June provided an unexpected boost in hopes for reconciliation, and an opening for more direct US engagement with the Taleban.

Ms Wells, a deputy assistant secretary of state, visited Kabul, Islamabad and other regional capitals several weeks later, and although she publicly insisted that the current US strategy was working, rumours spread that Washington was holding or planning secret talks with the insurgents.

The motives behind the Taleban's participation in the talks are less clear.

Several analysts said that while the insurgents are doing well on the battlefield and have no immediate incentive to talk, their leaders were impressed by the conciliatory atmosphere of the June truce and may sense a new opportunity to press their demands on US officials.

Still, several Afghan observers with longtime links to the Taleban said the insurgents would probably remain adamant on positions that the US government would not accept, such as imposing syariah law on the country and removing all foreign troops.

Even if the Taleban were to join an Afghan government, the US military would likely seek to keep some troops and bases because of the continuing threat from the ISIS.

One Taleban official told news agencies that the group's delegation requested free movement in several areas that the insurgents control, and that the US visitors urged a second truce during the Muslim feast of Eid-ul-Adha, which falls in the third week of August.

Analysts said the Taleban rebels have reasons not to seem too eager to make peace, though, such as fear of losing their hardcore fighters to the region's more aggressive ISIS forces, known here by the Arabic acronym Daesh.

"They are scared that if they make a deal with the government, some of their fighters, who have no skills except pulling a trigger, may join Daesh," said Mr Waheed Mojhdah, an analyst in Kabul who has longtime connections with the Taleban. "Daesh is waiting to invite them."