KABUL (AFP) - A US soldier was killed in Afghanistan on Saturday (Nov 24), Nato said, taking the number of American service personnel to die in the war-torn country this year to nine.

Nato's Resolute Support mission would not immediately release any details about the soldier - the second US service member to be killed in Afghanistan this month - or the circumstances of their death.

But it follows a spate of so-called "insider attacks" that have rattled foreign troops tasked with training and assisting Afghanistan's military.

Brent Taylor, the mayor of North Ogden in Utah state and a father of seven, was shot dead in an apparent insider attack in Kabul on Nov 3.

That came after two similar attacks in October, one on Nato personnel in the western province of Herat and another on a high-level security meeting in the southern province of Kandahar that was attended by General Scott Miller, the top Nato and US commander in Afghanistan.

More than 2,200 American soldiers have been killed in Afghanistan since the 2001 US-led invasion that toppled the Taleban regime from power. 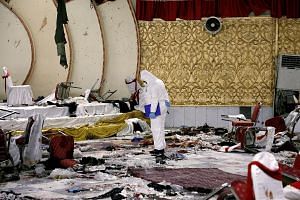 Group behind Kabul attack a mystery

Death toll of Kabul blast rises to 50, at least 75 injured

The number of American casualties has fallen dramatically since the end of 2014, when Afghan forces took over from US-led Nato combat troops to secure the country.

Since the start of 2015, 58 Americans have been killed, President Ashraf Ghani said this month.

In the same time period, nearly 30,000 Afghan police and soldiers have died, Mr Ghani said - a figure much higher than anything previously acknowledged.

The Taleban have intensified attacks on Afghan forces, inflicting record casualties even as the United States ratchets up efforts to engage the militants in peace talks.

More than 17 years since the start of the conflict, the US is trying to find a way out of the war.

US envoy Zalmay Khalilzad is spearheading efforts to strike a peace deal with the Taleban before Afghanistan's April presidential election.

A Taleban delegation met with Mr Khalilzad in Doha in October and November to discuss ending the Afghan conflict.