KABUL/DOHA (AFP) - Washington is hoping for a breakthrough as talks between the US and the Taleban resumed in Doha on Saturday (Aug 3) in a bid to end 18 years of war in Afghanistan.

The US, which invaded Afghanistan and toppled the Taleban in 2001, wants to withdraw thousands of troops but only in return for the insurgent group renouncing Al-Qaeda and curbing attacks.

Washington is hoping to strike a peace deal with the Taleban by Sept 1 - ahead of Afghan polls due the same month, and US presidential polls due in 2020.

US President Donald Trump told reporters at the White House on Friday that "we've made a lot of progress. We're talking".

A coalition led by Washington ousted the Taleban accusing it of harbouring Al-Qaeda militants who claimed the Sept 11, 2001, attacks against the US that killed almost 3,000 people.

In another sign of progress, the Afghan government has formed a negotiating team for separate peace talks with the Taleban, that diplomats hope could be held as early as later this month.

The Washington Post reported on Thursday that an initial deal to end the war would see the US force in Afghanistan reduced to as low as 8,000 from the current level of around 14,000.

In exchange, the Taleban would abide by a ceasefire and renounce Al-Qaeda, the Post reported, citing US officials. 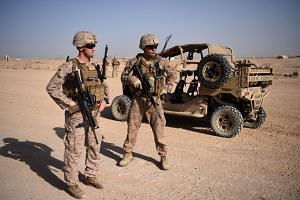 US to withdraw thousands of troops from Afghanistan

The proposed agreement would also require the Taleban to broker a separate peace deal with the Afghan government, with which it has so far refused to speak, Fox News reported.

However, an Afghan official hinted last week that the government of President Ashraf Ghani was preparing for direct talks with the Taleban, the details of which have yet to be announced.

Council on Foreign Relations counter-terrorism expert Bruce Hoffman said that he doubted the Taleban would ever renounce Al-Qaeda - potentially hindering any deal.

"I believe that the Taleban and Al-Qaeda will remain joined at the hip," he told Agence France-Presse, questioning the sense of "believing the word of terrorist organisations".

"The Taleban can negotiate with the United States," he added but suggested that the Taleban would be unlikely to break their personal pledges to Al-Qaeda.

"It means that Al-Qaeda was going to continue fighting, counting on that once the US left Afghanistan it (the US) wasn't going to come back.

"Al-Qaeda and the Taleban would have free rein. It's not a far-fetched assumption."

The thorny issues of power-sharing with the Taleban, the role of regional powers including Pakistan and India, and the fate of Ghani's administration also remain unresolved.

The latest US-Taleban encounter follows last month's talks between influential Afghans and the Taleban which agreed a "roadmap for peace" - but stopped short of calling for a ceasefire.

That gathering, also in Doha, called for a monitored peace process, the return of internally displaced people to their homes and non-interference by regional powers in Afghanistan.

"Assuring women rights in political, social, economic, educational, cultural affairs as per (and) within the Islamic framework of Islamic values," also featured in the joint text.

Younger Afghans, whose lives have been overshadowed by almost two decades of war, are sceptical any deal will bring peace.

"We cannot trust the Taleban and their commitments because they were cruel and oppressive in their regime," said Abdul Jamil Qureshi, a 23-year-old psychology student at Kabul University.

Apparently believing they have the upper hand in the war, the Taleban have kept up attacks even while talking to the United States and agreeing to the Afghan dialogue.

The United Nations said on Saturday that civilian casualty rates across Afghanistan jumped back to record levels last month, following a dip earlier in the year.

More than 1,500 civilians were killed or wounded in the conflict in July, the highest monthly toll so far in 2019 and the deadliest single month since May 2017.

On Wednesday, at least 34 people were killed in western Afghanistan when their bus hit a roadside bomb - blamed by officials on the Taleban.

Most of the dead were women and children.