Prime Minister Narendra Modi has promised a strong response after a Pakistan-based militant group claimed responsibility for the suicide attack on a military convoy on Thursday that killed 44 paramilitary policemen.

India's government said it had evidence the group, Jaish-e-Mohammad (JeM), had the backing of Pakistan and demanded Islamabad take action. Pakistan has condemned the attack and rejected India's allegations.

US National Security Adviser John Bolton spoke to his Indian counterpart Ajit Doval on Friday night, promising to help bring those behind the attack to justice, the Foreign Ministry said in a readout of the phone call.

"The two NSAs vowed to work together to ensure that Pakistan cease to be a safe haven for JeM and terrorist groups that target India, the US and others in the region," the Foreign Ministry said.

"They resolved to hold Pakistan to account for its obligations under UN resolutions," it added.

India has for years accused Muslim Pakistan of backing separatist militants in divided Kashmir, which the neighbours both claim in full but rule in part. 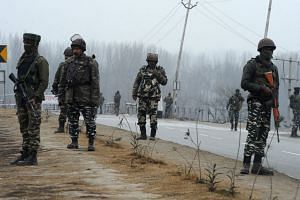 Over 70 years on, battle for Kashmir continues

Pakistan denies that, saying it only offers political support to the Himalayan region's suppressed Muslim people.

Modi, who is facing an election in the next few months, has called a meeting of political parties on Saturday to build support for action against Pakistan.

Indians have poured onto social media to vent their fury over the suicide bombing in Kashmir, with many of them calling for swift retribution against Pakistan as TV news shows hosted jingoistic debates.

When he swept to power at the head of a Hindu nationalist-led alliance in 2014, Modi vowed to pursue a tough line with Pakistan. The two countries have gone to war three times since independence from Britain in 1947, twice over Kashmir.

The attack comes at a difficult time for Pakistan, which is struggling to attract foreign investment and avert a payments crisis, with its swiftly diminishing foreign currency reserves at less than US$8 billion (S$10.8 billion), equivalent to two months of import payments.