NEW DELHI (REUTERS) - Prime Minister Narendra Modi said on Friday (March 29) his ruling coalition would increase its majority in India's upcoming election, despite some independent analysts suggesting it could disappear due to discontent over lack of jobs and depressed farm incomes.

Involving around 900 million voters, India's general election will be the world's largest democratic exercise, with the vote taking place in seven phases between April 11 and May 19.

Results will be announced on May 23, and in an interview with Republic Bharat television channel, Modi predicted an easy victory.

"The Bharatiya Janata Party (BJP) and its National Democratic Alliance partners will get more seats than the previous election," Modi said.

In 2014, Modi led his Hindu nationalist BJP and its allies to the biggest majority scored by any political group in nearly 30 years, as a Congress Party led government paid the price for a faltering economy.

During Modi's tenure the economy has gathered strength, but growth has been uneven, leaving large sections of the population unhappy. 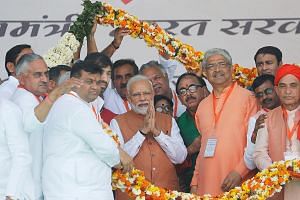 Modi pitches himself as 'watchman' to win votes

Up until a few weeks ago most opinion polls were expecting a close run race, but over the past month, Modi's BJP has benefited from nationalist fervour unleashed by a flare up in tensions with neighbouring Pakistan.

Modi dismissed Gandhi's chances this time round, predicting the opposition would have to wait another five years to mount a serious challenge.

"The 'Modi vs who' question could arise in 2024, but in 2019 the citizens have made up their mind and are not looking for anyone else."

As yet, no major survey has emerged measuring the impact on voter intentions from the upsurge in tensions with Pakistan.

The Indian opposition accuses Modi of using national security to score political points, especially after he addressed the nation on Wednesday to announce that India made a space breakthrough by shooting down one of its satellites in space using an anti-satellite missile.

During the interview, Modi again swiped Pakistan over a militant attack that killed 40 Indian paramilitary police last month in the disputed Kashmir region.

The Indian prime minister said he would not enter talks with Islamabad until "the world sees that Pakistan has taken action against terrorism."

Pakistan has denied any role in the attack and has said it is ready to hold talks with India to address the core issue of Kashmir.