DHAKA (REUTERS) - Ms Amina Begum, a Rohingya woman living in a refugee camp in Bangladesh, is undeterred in her quest to join her husband in Malaysia even though she already fell prey to traffickers once.

The 18-year-old says she was raped by a soldier in Myanmar, and even the risks associated with taking the perilous sea route from Bangladesh to Malaysia seem preferable to returning home.

She is one of many Rohingya refugees desperate to make the journey before the start of the looming monsoon season, leaving law enforcement on high alert as traffickers seek to cash in.

"The living standard in the camp (near Cox's Bazaar) has improved," Ms Begum told the Thomson Reuters Foundation by telephone via a translator. "But I know one day we will have to go back to Myanmar and I have no future there."

The Border Guard Bangladesh (BGB), a paramilitary force, rescued Ms Begum and 11 others during a raid near the border with Myanmar - the latest law enforcement crackdown that has seen at least 100 Rohingya refugees rescued from traffickers this year.

Having recently married another Rohingya refugee over the phone - a practice she says elders in her village have allowed - Ms Begum paid brokers in the hope of joining him in Malaysia.

Like Ms Begum, Ms Sharmin Khatoon - who wanted to go to Malaysia to live with her relatives - also fell foul of traffickers and was found with 20 other Rohingya by police this month in a house near the coast, a departure point for boats heading to Malaysia. 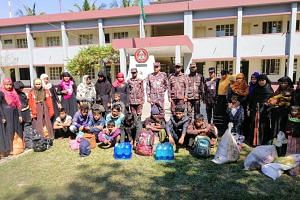 BGB officials say brokers are misleading refugees like Ms Begum and Ms Khatoon as all the trafficking routes to Malaysia have been closed ever since mass graves of Rohingya and Bangladeshis were found along the border between Malaysia and Thailand in 2015.

And many Rohingya are being cheated of their money by traffickers who are not actually capable of transporting people from Bangladesh to Malaysia, according to law enforcers.

Anti-trafficking organisations, however, fear that the routes through the Bay of Bengal, which became active around 2010, are now being used again by traffickers to move increasingly desperate Rohingya refugees out of Bangladesh.

It has been 18 months since more than 730,000 Rohingya fled persecution in Buddhist-dominated Myanmar and set up camps in the world's biggest refugee settlement south of Cox's Bazar, Bangladesh's top tourist location.

The camps have become more organised, but there are no signs the Rohingya might be able to leave soon.

Recent police activity suggests the risk of being trafficked has grown due to the promise of work and better lives abroad.

Records from law enforcement agencies in Bangladesh show at least 100 Rohingya refugees have been rescued from traffickers this year in Cox's Bazar, with most trying to get to Malaysia.

Mr Abu Bakar Siddique, from the Ministry of Home Affairs, said this week that 63 human trafficking cases involving Rohingya have been heard by mobile courts to-date in Bangladesh and that thousands of people have been prevented from leaving the camps.

The United Nations' migration agency - known as the International Organisation for Migration (IOM) - has identified and provided support to at least 217 victims of trafficking in Cox's Bazar since the crisis began, a spokeswoman said.

"However, we believe this figure represents just a fraction of the true number of Rohingya refugees affected by trafficking," said Ms Fiona MacGregor of the IOM in Bangladesh.

"(This is) due to the clandestine nature of the crime, the likelihood that most people trafficked do not return to camps, and because victims may be reluctant to seek help due to fear of reprisals."

Charities say traffickers have been active ahead of the monsoon season, which is due to start in April.

"The sea is calm now and that's what's encouraging traffickers," said Mr Omar Sadeque, a field officer with the non-profit Young Power in Social Action. "Once the monsoons begin in April, no one will want to take the sea route."

US House of Representatives accuses Myanmar of Rohingya 'genocide'

However, law enforcers in Bangladesh do not believe that traffickers are capable of taking the Rohingya to Malaysia.

"In most of the cases, we have seen that the brokers cheated the Rohingya and escaped on a different boat with the money," said Lieutenant Colonel Asaduzzaman Chowdhury, a BGB official.

The Bangladesh government, which has said that no Rohingya would be forced to go back to Myanmar, is working on new projects to prevent them from being trafficked.

Officials are trying improve the environment and conditions in the camps by creating more jobs and building better shelters.

The government is also raising awareness about trafficking and plans to erect watch towers to better monitor the situation.

"But... it's not easy to say you're successful when you have (one million) people stuck in a small area," Mr Siddique said.

Nonetheless, desperate Rohingya refugees such as Ms Khatoon will try to continue chasing the Malaysian dream.

"It's better to die in the sea than go back to Myanmar," she said. "There's hope in the sea, but there's no hope in Myanmar."