The Padma Awards are among the highest civilian honours given by India, and the awardees are named annually on the eve of Republic Day. A total of 85 Padma awards were announced on Thursday (Jan 25).

Padma Shri, the fourth highest civilian honour, is given for "distinguished service" in various fields.

The move to pick awardees from all 10 Asean members is aimed at promoting India's ties with the bloc, reported Press Trust of India.

"In an unprecedented and symbolic gesture of India ASEAN bonding and on occasion of silver jubilee of India ASEAN partnership and our Republic Day, PM Modi announced Padma Shri award for one individual from each ASEAN country," Ministry of External Affairs spokesman Raveesh Kumar tweeted on Thursday.

The Padma Shri awardees are Professor Koh, Cambodia's youngest parliamentarian Hun Many and Myanmar historian Thant Myint-U for the field of public affairs.

Malai Haji Abdullah Malai Haji Othman, the founder of the Society for Management of Autism Related Issues in Training, Education and Resources of Brunei, was cited for his work in the field of medicine. 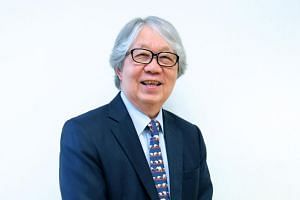 Philippine businessman Jose Ma Joey Concepcion III was cited for his work in trade and industry.

Prof Koh, 80, has served as Singapore's ambassador to the United States and the United Nations, and as president of the Third United Nations Conference on the Law of the Sea (Unclos) in 1981 and 1982.

He is currently chairman of the board of governors of the Centre for International Law at National University of Singapore.

Prof Koh was chief negotiator for the US-Singapore Free Trade Agreement, and was in the team that successfully argued the case for Singapore's claim to Pedra Branca at the International Court of Justice. He is also a key figure in Singapore's semi-official strategic dialogues with Asia's three most powerful nations - China, Japan and India.

Beyond diplomacy, Prof Koh has also been a champion of the arts, the environment and civil society, and an outspoken advocate of civic engagement.

Prof Koh told The Straits Times that he is "very honoured and grateful" to receive the award.

"I have always loved India and the Indian civilisation, and Indian food, music, dance and literature. For the past 10 years, I had the pleasure and privilege of co-chairing the India-Singapore strategic dialogue. I hope I have made a small contribution to strengthening the bridge of friendship between our two countries and peoples."