The Modi government should reopen the question of Indian relics with London. This may embarrass the previous Congress government for not having acted on this issue during its rule, but India's interests demand that what is part of its history should be returned to it.

A party which expects everyone to wear nationalism on their sleeves made the most anti-national statement.

The Bhartiya Janata Party (BJP) said that the Kohinoor diamond was "offered" by Dalip Singh, Maharaja Ranjit Singh's son, to Lord Dalhousie and it belongs to Britain. 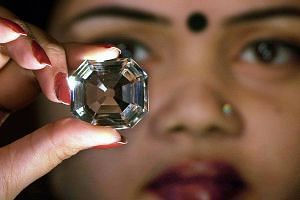 The angry comments following the statement made the party realise its mistake and it changed its stand abruptly.

It said that the Kohinoor belonged to India and would be brought back through talks with the British.

The question is about facts, not how London would feel.

True, there are two factions within the BJP, one in support of bringing back the diamond and the other believing that the Kohinoor belongs to the British. The party should know the facts and not reiterate what one of its factions feels.

Lord Dalhousie, the Viceroy, was keen to please his masters, the East India Company and Queen Victoria. He also wanted to further his career.

Dalip Singh, a minor, was under his charge because he was the Viceroy after the British had defeated the Sikhs to annex Punjab.

Lord Dalhousie did not only take Dalip Singh to Britain after converting his religion but also appropriated the Kohinoor as a 'possession' of the British.

He was so careful about the protection of the diamond that he did not take the usual Suez Canal route to London but went around South Africa, nearly twice the distance.

The Kohinoor was, no doubt, worth thousands of crores but it offered a sense of identity to India, and with it, a sense of authority.

Ahmed Shah Abdali, one of India's rulers, forcibly exchanged turbans with Nadir Shah when he came to know that the latter had tucked the Kohinoor under his turban.

Oblivious of all these facts, the BJP first washed its hands off the Kohinoor. But when it faced spontaneous angry comments, it went back on its original stand.

Even if the Kohinoor was "offered" to the British - the BJP's first stand - the party must realise that the "offer" by the country, which was Britain's colony, meant nothing.

It was not an offer of an elected government. Slave nations have no choice of their own.

I am, however, reminded of the discussion which I had initiated in the Rajya Sabha when I was its member in the late 90s.

After having vainly raised the issue with the British, when I was India's High Commissioner, I thought the Parliament would see the wrong done to the country.

The debate had hardly taken off when the then Foreign Minister, Jaswant Singh, requested me not to pursue the matter.

I was aghast when he said that the debate on the Kohinoor could adversely affect relations between India and Great Britain.

Till today, I have not been able to get an answer to my question: How?

Even according to a Unesco resolution, all the artifacts obtained by the rulers during their governance should be returned to the original owners.

New Delhi, for reasons best known to it, has not raised this matter by citing the Unesco resolution.

A country, which had colonies, has reasons to be reluctant.

Why should India which has been a colony itself have any hesitation?

In fact, the British government had even questioned the ownership of Kohinoor.

It said that after the birth of Pakistan, the ownership of Kohinoor could not be given solely to India but to the two countries- India and Pakistan.

In London, a foreign office high-up had defended Britain's decision not to return the Kohinoor, stating that the diamond belonged to Pakistan.

I told him that the Brits should then return it to Islamabad.

It would at least come back to the subcontinent and then we shall take up the matter from there.

It is clear that the British have no intention of returning the diamond or, for that matter, tons of material which is stored in the basement of museums in London.

Though there was no response from England, France complied with the UNESCO resolution and gave up the relics which they had in their possession during their rule.

When the Nehru Corner was opened at London, I asked the curator how many materials from the museum's basement did they put on display.

Even then the entire expense was borne by India.

I requested her to arrange for the display of other possessions at the Indian government's expense.

She curtly said no.

She also rejected my proposal that we display the said objects in our country at our own expense and then return them to the museum.

The priceless objects include, manuscripts, books, maps, posters and other such materials.

People of India may never see these relics of their history, since their government is reluctant to take up the subject.

The British establishment must have prevailed upon Prime Minister Narendra Modi to not mention the Kohinoor during his official visit to the United Kingdom some time back.

Otherwise, it is not understandable why he did not directly or indirectly refer to the subject even once.

The Modi government should reopen the question of Indian relics with London.

This may embarrass the previous Congress government for not having acted on this issue during its rule, but India's interests demand that what is part of its history should be returned to it.

The British establishment should appreciate the feelings of Indians.

The UK had done well not to display the Kohinoor in the yearly exhibition of diamonds.

It had probably dawned on the Cameron government that every time the Kohinoor is opened to the public, there is a demand from India that it should be returned to it. And it once again confirmed the fact that the diamond actually belonged to India and that Lord Dalhousie had fraudulently taken it to London.

My impression is that when it comes to their empire, the British cannot be objective.

There is pride, no humility, self-righteousness and no introspection.

The British are proud, nostalgic but annoyingly patronising about their colonial connection.

The new generation should have been different and given a new message, instead of plugging the same old line.

* The writer is an eminent Indian columnist.