In its editorial, the paper says that ISIS has been brought to his knees, but not its hideous ideology.

NEW DELHI (THE STATESMAN/ASIA NEWS NETWORK) - There was not another event in the world last weekend as momentous as the eclipse of the Islamic State of Iraq and Syria (ISIS).

What for now appears to be the comeuppance of the Caliphate has happened close to six years after its awesome emergence in the two embattled countries, not to forget the furious extension of tentacles further afield.

Yet it would be presumptuous to imagine that Saturday's fall of ISIS signifies the end of insurgency of the Islamist variety. The thought must be delusory and fears of a fresh wave of insurgency are not wholly unfounded, if not dangerously real quite yet.

The Caliphate's philosophy is driven by fanatical fury, embedded in the historical rift between Shias and Sunnis, the second being the ethnicity of ISIS.

This is the critical distinction that the world must accept, not least Baghdad and Damascus.

Once an existential menace to Iraq and Syria, ISIS today is in ruins, its foreign legions have been decimated, many of its foot soldiers are dead or have been imprisoned and its remaining leaders are on the run.

The fall has swiftly led the group to re-brand its raison d'etre, claiming that the losses are the outcome of an ongoing global war that plagues Islam. ISIS has explained the loss of its Caliphate by pointing to "divine providence" and saying that it is the "will of God". 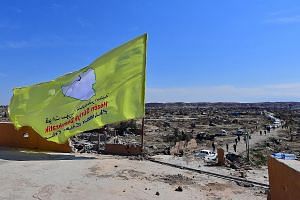 Either God is punishing or testing the Caliphate by afflicting it with trials, but either way, they tell their supporters that the only suitable response is to double down in your devotion because that is what God would want."

Some holdouts that surrendered during the final onslaught on Baghuz have emitted a renewed signal of intent ~ "The Islamic state will rise again."

The outlook remains ever so fearsome, and the plan of action was articulated by two women, their faces covered in niqabs, as they were driven to detention centres by their Kurdish captors.

The collapse of ISIS can thus be reckoned as a spectacular victory of the Kurdish-led and US-backed Syrian Democratic Forces, that eventually confronted the Caliphate.

For all the boots-on-the-ground strategy of the United States of America over the past six years and the bombardment from the skies by Russia, it is a predominantly ethnic entity that has defeated the ISIS.

Well might the likes of Donald Trump feel justified in pulling out troops from Syria. The immediate target has been decimated though the repressive Bashar al-Assad soldiers on.

The visual of a Kurdish woman fighter flashing the victory sign reaffirms that in the final stages, it turned out to be a war between the Kurds and the Caliphate.

Mosul, Raqqa, and Baghuz ~ hitherto specks on the map ~ are now the storm-centres of history on the make. Culture and civilisation are in ruins. Such tragedies fashion history as do momentous events.

The ideologue has been brought to his knees, but not his hideous ideology.

The Statesman is a member of The Straits Times media partner Asia News Network, an alliance of 23 news media entities.