COLOMBO (AFP) - Sri Lanka's ethnic Tamil community, scarred by a devastating civil war, could emerge as kingmakers in a power struggle between rival prime ministers - but they have reasons to mistrust both.

Mr Wickremesinghe refuses to accept his dismissal and has remained in the premier's official residence while both men fight for support in Parliament.

The main Tamil party has 16 seats in the 225-member Parliament that should decide between Mr Rajapaksa, who unleashed the full force of the military on Tamil Tiger fighters, their supporters and civilians a decade ago, and Mr Wickremesinghe, whose foot-dragging on reform has grated.

"We have to choose between the devil and the deep blue sea," Tamil National Alliance (TNA) legislator Dharmalingam Sithadthan told AFP of the two men, both of whom are members of the majority ethnic Sinhalese community.

Mr Wickremesinghe's party has 104 members in Parliament, while Mr Rajapaksa and his allies have 99 - although some members of each camp have switched sides.

The 16 Tamil votes will likely play a crucial deciding role.

The prospect of Mr Rajapaksa returning to power worries Tamils concentrated in the north and east of the country because of the bloody past.

Mr Wickremesinghe is also distrusted because of the slow pace of promised reconciliation after the war.

His party had promised accountability for war-time atrocities against the Tamils, but since coming to power, he has not prosecuted any of the perpetrators.

He is also yet to deliver on promises of political reform to grant more authority to Tamils as well as reparations for war victims.

Sri Lanka's Tamils generally feel disconnected from national politics, but the power struggle has shocked them, said Mr Ahilan Kadirgamar, a political economist from the Tamil stronghold of Jaffna in the country's north. 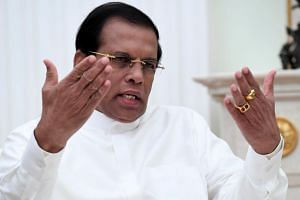 "There is anxiety over Mahinda Rajapaksa coming back," he said.

The United Nations estimates that more than 100,000 people were killed in the country's brutal 37-year civil war, including 40,000 Tamil civilians who perished when Mr Rajapaksa ordered a brutal final offensive in 2009.

Residents in Tamil areas were under constant surveillance during Mr Rajapaksa's reign.

Tamils had to get military permission to host outsiders in their homes - even for a meal. Many feared those tight controls could return with Mr Rajapaksa, Mr Kadirgamar said.

Mr Rajapaksa's decade in power ended in 2015. He blamed his presidential election defeat on Tamils who voted against him.

"I get calls from my constituents asking what will happen if Mahinda becomes PM," the TNA's Sithadthan said. "Our people are worried about their security, their future."

Mr Sithadthan said his parliamentary bloc could risk retribution if it chose the losing side in the power struggle.

"If we support one party, the other will target us at some time when they return to power," he said. "It is not a happy situation for us to be king-makers at this time."

Mr Kadirgamar said Tamils were also fearful that Jaffna would once again be militarised and the political stability of recent years threatened.

"Under Rajapaksa, people always felt they were being watched," Mr Kadirgamar said.

Ms Praveena Raviraj, whose legislator father was gunned down in 2006, said she feared for her future as she believed her father was killed by Mr Rajapaksa's forces.

"As the daughter of a murdered member of Parliament who has been living in Sri Lanka, I am glad I just got my seven-year multiple entry visa to Canada," she said of the prospect of Mr Rajapaksa becoming premier.

Mr Sirisena and Mr Wickremesinghe came to power in 2015 promising ethnic reconciliation and accountability for war-time excesses under Mr Rajapaksa's rule, but they have been slow to deliver.

On Wednesday, Mr Sirisena said he was opposed to greater devolution for Tamils who have been demanding more authority on land and law-and-order matters.

"As long as I am President, there will be no federal state in Sri Lanka," Mr Sirisena said.

Tamil analysts said the community could not expect any Sinhalese leader to grant concessions to the minority group.