KABUL (REUTERS) - Taleban insurgents have seized Afghanistan’s second- and third-biggest cities, local officials said on Friday (Aug 13), as resistance from government forces crumbled and fears grew that an assault on the capital Kabul could be just days away.

A government official confirmed that Kandahar, the economic hub of the south, was under Taleban control as US-led international forces complete their withdrawal after 20 years of war.

Herat in the west also fell to the hardline Islamist group.

“The city looks like a frontline, a ghost town,” provincial council member Ghulam Habib Hashimi said by telephone from the city of about 600,000 people near the border with Iran.

“Families have either left or are hiding in their homes.”

A US defence official said there was concern that the Taleban – ousted from power in 2001 after the Sept 11 attacks on the United States – could make a move on Kabul within days.

Washington on Thursday announced plans to send 3,000 additional troops to help evacuate US embassy staff, and the Pentagon said most would be in Kabul by the end of the weekend.

Britain also confirmed the start of a military operation to support the evacuation of its nationals.

“Kabul is not right now in an imminent threat environment, but clearly… if you just look at what the Taleban has been doing, you can see that they are trying to isolate Kabul,” Pentagon spokesman John Kirby said on Friday.

The US embassy in the Afghan capital informed staff that burn bins and an incinerator were available to destroy material including papers and electronic devices to “reduce the amount of sensitive material on the property,” according to an advisory seen by Reuters.

A State Department spokesman said the embassy was following standard procedure to “minimise our footprint.”

The United Nations has said it would not evacuate its personnel from Afghanistan but was relocating some to Kabul from other parts of the country. Many other Western embassies and aid groups said they were bringing some staff home.

In desperation, US scours for countries willing to house Afghan refugees

UN Secretary-General Antonio Guterres urged the Taleban to immediately halt the offensive. Warning that “Afghanistan is spinning out of control,” he urged all parties to do more to protect civilians.

Afghan First Vice-President Amrullah Saleh said after a security meeting chaired by President Ashraf Ghani that he was proud of the armed forces and the government would do all it could to strengthen resistance to the Taleban.

The explosion in fighting has raised fears of a refugee crisis and a rollback of gains in human rights. Some 400,000 civilians have been forced from their homes since the start of the year, 250,000 of them since May, a UN official said.

Families were camping out in a Kabul park with little or no shelter, having escaped violence elsewhere in the country.

“The situation has all the hallmarks of a humanitarian catastrophe,” the UN World Food Programme’s Thomson Phiri told a briefing.

Under Taleban rule from 1996 to 2001, women could not work, girls were not allowed to attend school and women had to cover their faces and be accompanied by male relatives if they wanted to venture out of their homes. In early July, Taleban fighters ordered nine women to stop working in a bank.

Of Afghanistan’s major cities, the government still holds Mazar-i-Sharif in the north and Jalalabad, near the Pakistani border in the east, in addition to Kabul.

The Taleban has taken the towns of Lashkar Gah in the south and Qala-e-Naw in the north-west, security officials said. Firuz Koh, capital of central Ghor province, was handed over without a fight, officials said. 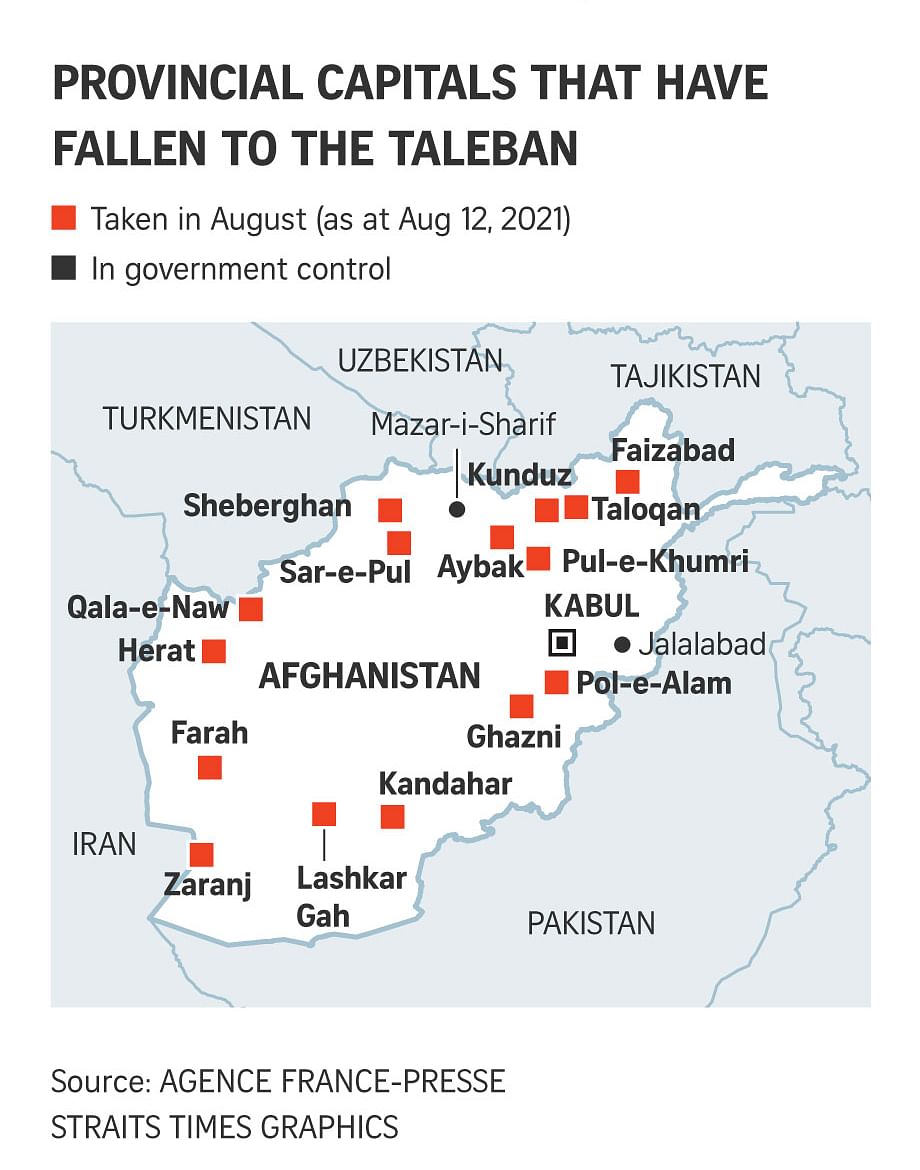 Kandahar’s loss is a heavy blow to the government. It is the heartland of the Taleban – ethnic Pashtun fighters who emerged in 1994 amid the chaos of civil war.

The militants have taken control of 14 of Afghanistan’s 34 provincial capitals since Aug 6.

After seizing Herat, the insurgents detained veteran commander Ismail Khan, an official said. They had promised not to harm him and other captured officials.

A Taleban spokesman confirmed that Khan, who had been leading fighters against the insurgents, was in their custody.

Al-Jazeera later reported Khan had boarded a plane to Kabul bearing a message from the Taleban. The report could not immediately be confirmed.

The speed of the Taleban offensive has led to recriminations over President Joe Biden’s decision to withdraw American troops.

Biden said this week he did not regret his decision, noting Washington has spent more than US$1 trillion (S$1.3 trillion) in the country’s longest war and lost thousands of troops, and calling on Afghanistan’s army and leaders to step up.

Opinion polls showed most Americans back Biden’s decision to withdraw the troops. But opposition Republicans criticised the Democratic president’s decision.

US Senate Republican leader Mitch McConnell said the exit strategy was sending the United States “hurtling towards an even worse sequel to the humiliating fall of Saigon in 1975,” referring to Hanoi’s victory in the Vietnam war.