NEW DELHI (AFP) - An Indian teenager who accused a senior politician of rape is fighting for her life after being critically injured in a crash that killed two relatives, raising suspicions of foul play.

Her lawyer was also badly injured in the accident, which occurred in Uttar Pradesh state on Sunday (July 28) when their car collided with a truck.

Police said on Monday they had arrested the truck driver and were investigating claims that it may have been a hit to silence the girl.

"We are analysing all the aspects, we are looking into call details and have recorded statements of eyewitnesses," state police chief O.P. Singh told reporters.

The 19-year-old accused Bharatiya Janata Party state lawmaker Kuldeep Singh Sengar of raping her at his home in 2017, but police in the notoriously lawless state initially refused to take action.

Her father was then detained by police and severely beaten in custody - allegedly by Sengar's brother - before dying from his injuries.

Months later, the woman tried to set herself on fire outside the home of Uttar Pradesh leader Yogi Adityanath, a BJP stalwart.

Protests across India led to the case being handed over to federal investigators who arrested Sengar last year. He denies the accusations.

The woman's family said the crash was a deliberate bid to kill her so the rape case does not go to trial. 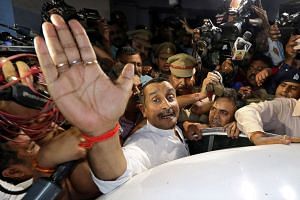 Spotlight on rapes in India

India's Parliament was briefly suspended on Monday because of opposition protests over the case.

"There could be a possibility of murder behind this incident," said Akhilesh Yadav, a former Uttar Pradesh chief minister and head of the regional Samajwadi Party.

But police chief Singh said the crash "appears to be purely a road accident".

He said the truck was speeding, but declined further comment while an investigation went ahead.

However, media reports said suspicions had been raised because the truck's registration number was painted over.

Priyanka Gandhi, a leader of the opposition Congress party, said the accident was "shocking" and questioned why Sengar was still a member of the BJP.

The case has shone a spotlight on India's atrocious record on rape. Nearly 40,000 cases are reported every year, according to official figures.

Campaigners say the real number is higher, with victims wary of filing cases because of the social stigma and a lack of faith in investigators.