The Indian Ocean nation has been paralysed since Oct 26 when President Maithripala Sirisena controversially sacked the prime minister and replaced him with a former rival, Mr Mahinda Rajapaksa.

In a bid to resolve the crisis, Mr Wickremesinghe and Mr Rajapaksa both went to meet the president at his office in the capital on Sunday for what were widely regarded as crucial negotiations.

All three men were at the Presidential Secretariat building for nearly two hours with their aides and party seniors - but failed to end the political deadlock.

Mr Wickremesinghe has demanded his government be restored, challenging Mr Rajapaksa to demonstrate a majority in the 225-member assembly.

Brawling erupted in Parliament last Friday with Rajapaksa loyalists smashing furniture, throwing chilli powder and launching projectiles at rivals in a bid to disrupt a no-confidence motion against him.

Mr Rajapaksa's party has admitted that it lacked a simple majority in the legislature. Rivals accuse it of delaying a vote because it does not yet have the required number of MPs. 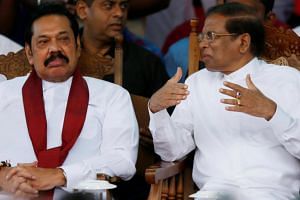 "He (Rajapaksa) must submit himself to a floor test," said Mr Lakshman Kiriella, an MP from Mr Wickremesinghe's United National Party.

"Otherwise he cannot run a government."

Mr Kiriella said the United National Party and its allies have twice demonstrated that they had 122 legislators - nine more than the 113 required to demonstrate an absolute majority.

Mr Rajapaksa's legislator son Namal confirmed the talks had failed and said they would press for the snap election which was called by Mr Sirisena on Nov 9 - though later suspended by the Supreme Court until it determines the legality of an early vote.

"We reiterate our call for a general election so that people can decide who should be their government," Mr Namal Rajapaksa said on Twitter.

Mr Sirisena said the parties agreed on Sunday to ensure the peaceful conduct of Parliament when it meets again on Monday afternoon.

According to his office, the President called Sunday's meeting "in order to end the current political unrest and conflict situation and to allow the normal functioning of the Parliament".

Mr Wickremesinghe has said Sri Lanka needs "stability" and that he is ready to work with Mr Sirisena, despite the personality clash that triggered the constitutional crisis.

After sacking Mr Wickremesinghe on Oct 26, Mr Sirisena initially suspended Parliament and dissolved it on Nov 9.

The legislature reconvened only on Nov 14, after the Supreme Court overruled his action and demanded a full hearing.

For 19 days, Sri Lanka had two claimants to the prime minister's post - but last Thursday, parliament speaker Karu Jayasuriya held that he would recognise neither as premier, leaving the country suspended in constitutional crisis.

Officially, Sri Lanka no longer has a government.

Legislators say that with the administration at a standstill, key sectors such as tourism are taking a serious battering.

Both sides have also warned that a prolonged power vacuum could lead to unrest.