COLOMBO (AFP) - Emergency teams rushed to distribute aid Sunday (May 28) to half a million Sri Lankans displaced after the island's worst flooding in more than a decade, as authorities upgraded the death toll to 146.

The official Disaster Management Centre said 112 people were still missing, with 50 injured in hospital, since torrential rain and landslides swept away entire villages.

Floodwaters were receding in some areas after a break in the rain, giving authorities a chance to deliver much-needed supplies to victims who lost everything in the deluge.

Heavy rains on Friday triggered the worst flooding and landslides in 14 years in the southern and western parts of the island.

Nearly 2,000 houses were damaged or completely destroyed. Almost half a million Sri Lankans had been forced from their homes, with most moving into temporary shelters. 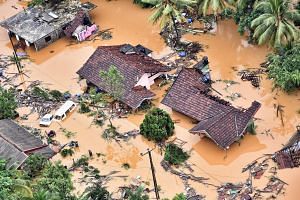 The charity Save the Children said about a tenth of those displaced were children below the age of five years.

Medical teams were dispatched to the worst-affected areas to help prevent an outbreak of waterborne diseases.

"We have the expertise to deal with this situation," Health Minister Rajitha Senaratne said, adding cholera and diarrhoea had been successfully prevented in past floods.

The government withdrew an evacuation order for thousands of residents in the southern district of Matara as water levels subsided.

"The threat of floods around the (river) Nilvala has subsided," irrigation department director M. Thuraisingham said.

"The flood levels near Colombo have also gone down because we did not have rain in the past 24 hours." Water levels in Ratnapura, Sri Lanka's gem district east of Colombo, subsided but many villages in Kalutara, south of the capital, were still under water, officials said.

The military has deployed helicopters, boats as well as amphibious vehicles to distribute aid pouring in from residents in areas unaffected by the floods.

The government appealed for bottled water, new clothes and dry rations for those displaced.

Sri Lanka has also sought international assistance, with India rushing a naval ship equipped with a medical team and other supplies Saturday.

A second Indian vessel was due to arrive in Colombo on Sunday, with a third expected Monday, the government said.

The United Nations said it will give water containers, water purification tablets and tarpaulin sheets while the World Health Organisation will support medical teams in affected areas.

Pakistan said it was in talks with Colombo to send relief supplies. Islamabad recently gave 10,000 tonnes of rice to Sri Lanka to help drought victims.

The meteorological department said the rains ended a prolonged drought that had threatened agriculture as well as hydropower generation.

The flooding is the worst since May 2003 when 250 people were killed and 10,000 homes destroyed after a similarly powerful monsoon, officials said.